The global state of Neobanks

In 2018, there were 60 worldwide digital challenger banks, the so called Neobanks, that had launched up to that date.

Now, only three years later, that number has increased by more than four times to an astonishing 256 live Neobanks, with many more in the process of being launched.

At this time of accelerated growth there is, however, another side of the story, as the COVID-19 health crisis puts a lens on the still fragile economics of the segment, according to Exton Consulting.

For anyone following the evolution of digital start-ups in Financial Services, it has likely been a difficult task to keep count of all the FinTechs, InsurTechs and RegTechs popping up across markets.

Regularly published FinTech “radars” may seem to be out-of-date the second they hit the web, and often show a myriad of players disrupting the Payments, Lending, or Banking as a Service landscape – just to name a few.

A study conducted by Exton earlier this year on the French market, for example, counted more than 350 local FinTech startups in France alone.

Yet, for a long time, FinTechs rather focused on solving a specific financial pain point, while the setup of full Neobanks, launched to effectively compete with incumbent banks, remained the exception.

As shown in the figure below, that began to change around 2015 when an increasing number of early-mover digital banks started to offer a blueprint for many others to follow suit. 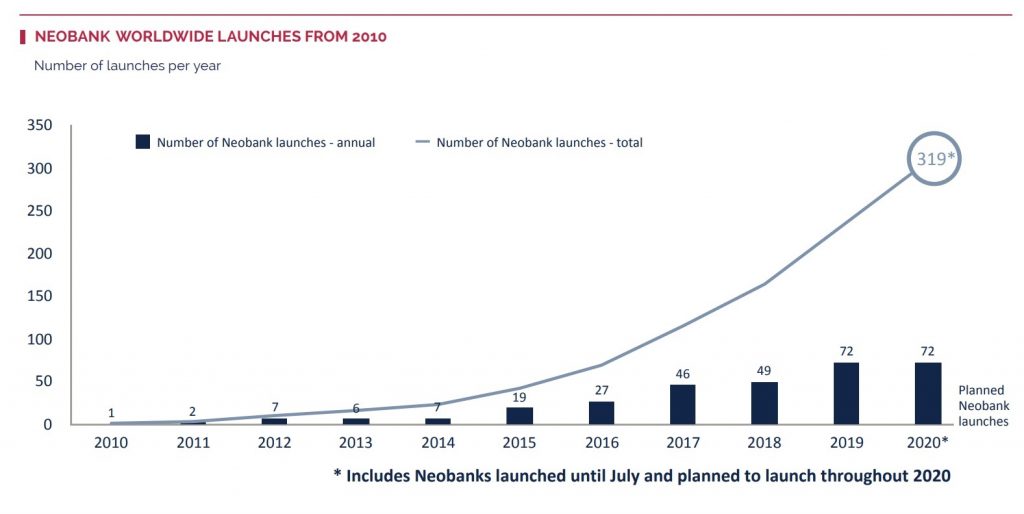 By 2019, more than 70 Neobanks launched within one year and 2020 numbers are expected to be in the same range. In other words, over the last two years there was a Neobank launched every five days somewhere in the world.

Five or six years ago, the Neobanking revolution was largely focused on Europe with some of the earliest mobile-centric and user experience-focused examples seeing the light in the UK, France, Finland, Germany or Russia.

Different from back then, Neobanking is now a truly global phenomenon and the universe of players is spread across the globe with an increasingly complete coverage of segments and banking models in major markets also in Asia Pacific and the Americas.

Latin America for example has seen an exceptionally dynamic evolution with now close to 50 live Challengers following the footsteps of the Nubank success story in Brasil.

China in turn has witnessed a unique development with the explosive growth of financial ecosystems like Ant Financial and WeBank which – apart from attracting hundreds of millions of clients and gaining a dominant position in payments – have successfully expanded into consumer lending and other products.

Country-by country differences are enormous and while on one hand this demonstrates different levels of entrepreneurship across countries, it is also a result of perceived market opportunity left open by the incumbent banks.

Two noteworthy examples in Europe are the UK and Poland.

While the UK has produced 37 Challengers already and thus shown the biggest individual innovation capacity in the sector, Poland is still waiting for its first home-grown pure digital bank (Note: mBank despite its digital reputation is not considered a Neobank in this analysis due to its history and existence of a branch network).

It is likely not for the lack of opportunity in this country which is widely considered as one of the most digital banking countries overall but rather resembles a fear of not being able to differentiate and compete Vs the strong and highly digital incumbent banks in the country.

Following a “scale first” strategy, a growing number of Neobanks have expanded their services to outside their home country and – unsurprisingly – EU based banks have been most active in that regard making use of EU passporting mechanisms.

Currently 43 Neobanks (~17%) are operating multi-geography, with Revolut and TransferWise being the most global examples operating already in 36 markets and plans to expand further in the near future.

However, despite the early-mover advantage these multi-geography banks had in launching, recent numbers suggest that “local heroes” can still attract significant client interest.

This is showcased by the strong growth of domestic players like Bnext in Spain or Hype in Italy. But with local Neobanks growing quickly and new market entries happening frequently, the white spaces and opportunities are closing fast, and first mover advantages are becoming ever rarer outside of niche and segment-specific offerings.

For those that are considering the launch of a new Neobank or the expansion to other countries, it now becomes increasingly crucial to prioritize where and in what segment to launch.

The post The global state of Neobanks appeared first on Payments Cards & Mobile.