The cheque is dead – Long live the cheque

On learning that his obituary had been published, Mark Twain telegraphed: “Reports of my death are greatly exaggerated”. The same could be said of the cheque. While cheque usage is declining, reports of its death are greatly exaggerated. In fact, the cheque is experiencing a ‘dead cat bounce’ and could see a new lease of life in the digital age, with cheque imaging and faster cheque clearing.

1 billion cheques are processed every year in Canada (4 million every day), according to the Canadian 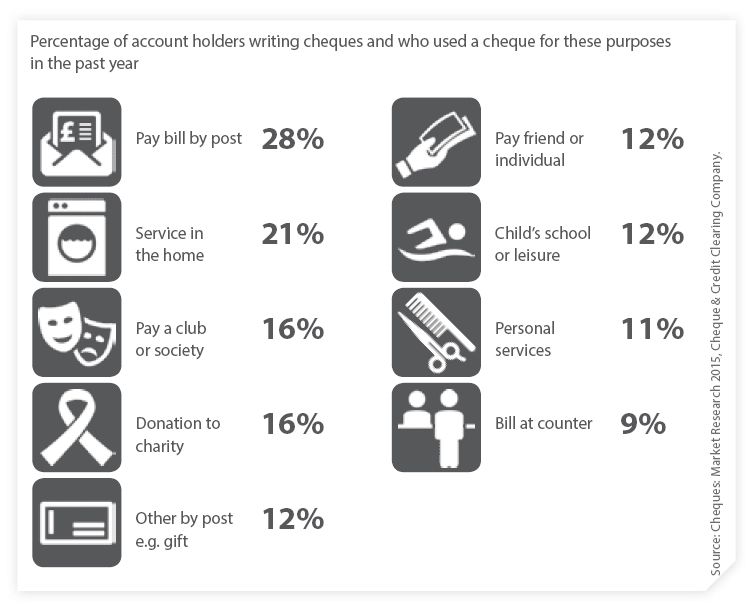 The cheque is dead – Long live the cheque

Payments Association. Approximately 60% of these cheques are issued by the government, large corporations and business of all sizes, and 40% by consumers.

In the UK, cheque usage peaked in 1990 when 4 billion payments were made by cheque. Usage has been declining at an annual rate of about 12% a year since 2008 as businesses and consumers switch to electronic payment means. Last year, the 464 million payments by cheque contrasted with 18 billion payments in cash, 9.1 billion by debit card, 2.3 billion by credit card and 6.9 billion by automated methods, such as Bacs, CHAPS and Faster Payment.

The changing attitudes of retailers to stop accepting cheques, the closing of the cheque guarantee scheme in 2011 and decision to end universal cheque clearing (which was later reversed) have also played a significant part in the declining use of cheques in the UK.

Re-booting the cheque for the digital age

Remote deposit capture or cheque scanning is already being used widely in Canada, India and the US and to a lesser extent in other countries, such as Australia, Ghana, New Zealand and Nigeria.

“The US was the first country to introduce legislation around cheque imaging in 2004, stating that the image has legal validity as a physical cheque,” explains Giovanni Bandi, director, UK & Ireland business development, NCR.

“At first, businesses started to use remote cheque imaging via a banking application instead of visiting branches to deposit physical cheques. Over the years, this technology expanded to bank branches for interbank cheque clearing. Instead of sending paper cheques to the clearing house, branches could just send images. However, the biggest change for the consumer has been making this technology available on the mobile.”

More than 1-in-8 Americans reported depositing a cheque using a mobile device within the past year, according to a recent survey by the American Bankers Association. Of those who have used mobile deposit, 80 percent report using it regularly — at least monthly.

Cheque imaging improves the experience for customers, who can deposit cheques remotely at any time without having to visit a branch. However, there are also considerable savings for banks. The cost of using mobile cheque deposit is 16-20 times less than processing cheques in-branch in the US, according to figures from JP Morgan Chase & Co.

Around 7,000 financial institutions in the US offer cheque imaging services. Cheques to the value of almost $20 trillion are now processed electronically in the US each year. Meanwhile in Canada, more than 20 financial institutions are offering mobile cheque deposit to their customers. Since the Canadian Payments Association approved the cheque imaging rule to allow for mobile remote deposit capture, Canadians have used their mobile phone to deposit more than 1 million cheques.

The UK government is currently working on regulations to underpin new legislation for cheque imaging, estimated to be completed by July 2016. Meanwhile the Cheque and Credit Clearing Company (C&CCC), the organisation which manages the cheque clearing process in the UK, is working with banks on technical and infrastructure changes. Cheque imaging will speed up cheque processing. Although timescales have not been confirmed, under plans currently in discussion a cheque paid in on a weekday will be cleared by the next weekday at the very latest — a significant improvement on the current 5-6 days.

What lessons can the UK and other countries considering cheque imaging learn from countries who have already implemented it? Bandi from NCR advises:

“Focus on the customer. There should be good promotion of the service with simple guidance and explanations. For example, Canada did a good job of promoting cheque imaging with TV advertising, leaflets in branches and targeting mobile banking users. Make it easy for customers as clear communications increases adoption rates.

Secondly, look at solutions that allow you to move quickly across channels. So, maybe the bank wants to look at their branches today, and then mobile and ATM channels later. Look holistically at the various customer touch points, and be ready to implement these as and when needed.”

What people write cheques for,
and why

Understanding what consumers and businesses write cheques for and why has important implications for innovation. According to market research by the Cheque & Credit Clearing Company, consumers most often write cheques to pay bills by post (28%), for a service in the home (21%), to pay a club, society or to make donations to charity (16%), or to send a gift via post, pay a friend or a child’s school (12%).

Meanwhile 55% of UK businesses said that they had made payments by cheques in the past month, down from 64% in 2014.

Just under a third of businesses said they used cheques because they always had, and to manage cash flow. Other reasons included because the payee requested it (25%), the money leaves the account slowly (21%) and to control who can pay (18%). Bacs, direct debit and internet banking were cited as convenient alternatives.

The post The cheque is dead – Long live the cheque appeared first on Payments Cards & Mobile.