The cashless society – what happens when the power goes out?

Bloomberg recently reported that the Fed was forced to fly a planeload of cash to Puerto Rico to help avert disaster, when Hurricane Maria knocked out power on the island, the residents realized they were going to need physical cash — and a lot of it. 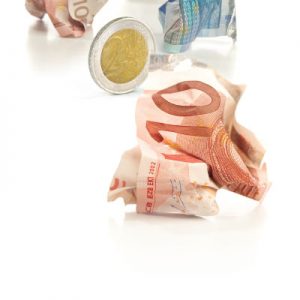 The cashless society – what happens when the power goes out?

William Dudley, the New York Fed president, put the word out within minutes, and ultimately a jet loaded with an undisclosed amount of cash landed on the stricken island.

People familiar with the situation on the ground described corporate clients’ urgent requests for hundreds of thousands in cash to meet payrolls, and the challenge of finding enough armored cars to satisfy endless demand at ATMs. Such were the days after Maria devastated the US territory last month, killing 39 people, crushing buildings and wiping out the island’s energy grid. As early as the day after the storm, the Fed began working to get money onto the island,

For a time, unless one had a hoard of cash stored up in one’s home, it was impossible to get cash at all. 85% of Puerto Rico is still without power, as of October 9. Bloomberg continues: “When some generator-powered ATMs finally opened, lines stretched hours long, with people camping out in beach chairs and holding umbrellas against the sun.”

In an earlier article from September 25, Bloomberg noted how, without cash, necessities were simply unavailable:  “Cash only,” said Abraham Lebron, the store manager standing guard at Supermax, a supermarket in San Juan’s Plaza de las Armas. He was in a well-policed area, but admitted feeling like a sitting duck with so many bills on hand. “The system is down, so we can’t process the cards. It’s tough, but one finds a way to make it work.”

The cash economy has reigned in Puerto Rico since Hurricane Maria decimated it, levelling the power grid and wireless towers and transporting the island to a time before plastic existed. The state of affairs could carry on for weeks or longer in some remote parts of the commonwealth, and that means it could be impossible to trace revenue and enforce tax rules.

Note the deep concern with “trac[ing] revenue” and “enforc[ing] tax rules” — as if making payroll for ordinary people were not the real problem here.

Puerto Rico has been fortunate that the US, so far, has not attempted to implement many anti-cash measures that have been popular among central bankers in recent years.

Abolishing cash, of course, has become de rigueur among mainstream economists who have long argued that physical cash is an impediment to “nontraditional” monetary policy like negative interest rates. Moreover, advocates claim, physical cash makes it harder to control the flow of money, collect taxes, and control black markets.

This drive to supposedly fight crime and corruption was given as the justification for the disastrous war against cash in India in 2016. Hatched as a scheme to assert more government control over the economy, the Indian government removed mostly large bills from circulation in India, which accounted for 85% of its physical cash by value.

The demonetization badly damaged the economy. The Wall Street Journal reported in December: Not surprisingly, shock waves from the announcement continue to crash through the economy. The Asian Development Bank cut its growth estimate for India for the financial year ending March 31 to 7% from 7.4%. JP Morgan expects growth to decline by half a percent to 6.7%.

Meanwhile, falling sales have begun to translate into layoffs spanning various sectors, including construction, textiles and jewelry. The Centre for Monitoring Indian Economy estimates the transaction costs alone of swapping out an estimated 14.2 trillion rupees’ worth of currency to be 1.28 trillion rupees, or about $19 billion.

India’s economy will eventually recover from this self-inflicted wound, but there’s no question that demonetization has created doubts about the Prime Minister, Mr. Modi’s competence. One can only imagine how much more grim matters would be for Puerto Rico if most physical cash were made illegal as happened in India.

It’s unlikely, however, that any well-known economists — such as Kenneth Rogoff who has deemed physical cash “a curse” — will be recanting their anti-cash views.

If you want to make an omelet, you have to break some eggs, and while some of the “little people” like Indian peasants and Puerto Rican workers might have to suffer greatly whenever the power goes out, we all have to make sacrifices.

Perhaps this is what Richard Thaler — the newly announced economics Nobel-Prize winner — had in mind when he came in out in favor of demonetization in India.

Certainly, abolishing cash is likely to devastate a poor economy more than a wealthy one. A wealthy country, with more advanced and reliable infrastructure, and with greater access to resources in general, is more fully able to weather a shortage of physical cash, and natural disasters. Overall, though, going cashless makes an economy more fragile, and makes ordinary people sitting ducks whenever there is a natural disaster, or even worse disruptions such as wars.

The post The cashless society – what happens when the power goes out? appeared first on Payments Cards & Mobile.