The 50th anniversary of the ATM – The truth about Cash

The 27 June, 2017 marks 50 years since the inauguration of the world’s first cash dispenser in Enfield, London. Automated Teller Machines, more commonly known as ATMs, have since changed the shape of modern banking and how people access their cash.

The ATM has come a long way since the device originally invented by John Shepherd-Barron in 1967. In 1981 there were 22 ATMs in Germany and now, there are over 3 million ATMs across the world and banking customers can complete over 200 different kinds of transaction on the machines. 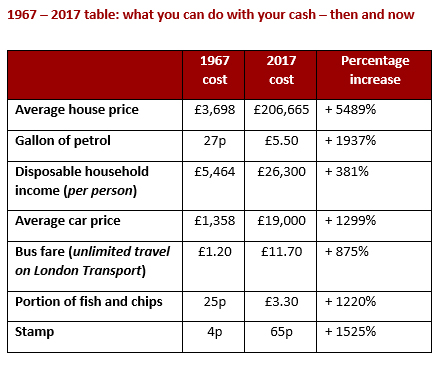 Back in 1967, the largest amount of cash that you could take out at an ATM was £10 – equivalent to around £130 today . What you could do with a tenner has changed dramatically.

“The delivery of physical currency hasn’t really changed since the installation of the first ATM in 1967. Whilst payment methods and transaction types have changed dramatically, how we obtain physical notes has remained consistent over the last 50 years,” says Richard Broadbent, General Manager, Banking, Wincor Nixdorf UK/I.

“We’ve seen a number of disruptive currency propositions being launched in the past few years, such as Bitcoin and Ethereum, but these have so far failed to really hit the mainstream. There remains something very meaningful about having tangible money in our pockets, and physical currency still remains at the centre of banking.

ATMs are integral to our relationship with cash. We trust them, and we rely on them as an important part of daily lives. Looking to the future, self-service networks will continue to develop and advance as the financial industry introduces new services centred on choice and convenience for today’s consumer – but the one thing that will remain consistent is the cash that they manage on a daily basis.”

According to a global online poll of 8,000 consumers conducted by YouGov on behalf of ACI Worldwide, easier, intuitive and more secure ways of accessing their bank accounts are a priority for users worldwide: 29% of UK consumers, 31% in France, 38% in Spain and 43% in Italy would like to see ATMs offer better and more secure ways of authentication.

Other services consumers would like to see from ATMs include better and more detailed information about their account such as mini-statements, alerts for upcoming payments or overdraft fees, the ability to dispense a new credit or debit card, or to access electronically signed official documents.

“Many of them want to use ATMs in a similar fashion. Using a phone to access an ATM is already a reality, hinting at a future where ATMs may be cardless. Many banks are also experimenting with new technologies that use alternatives to traditional PIN-based authentication.

I don’t see the ATMs heading for retirement any time soon. As well as being ubiquitous and simple to use, some people prefer hard cash as a deliberate way of controlling their spending. It shouldn’t be a surprise that ATMs remain so popular – they’re an incredibly successful piece of social technology. The trend towards regional bank branch closures may put an even greater emphasis on the role of the ATM, including services beyond simple cash withdrawal.”

The ATM remains relevant, but usage varies depending on the country: Germany leads the way with 48% of respondents using ATMs just as much as they always have, despite widespread availability of new digital forms of payments; this is followed by Spain at 47%, the UK at 42%, France and Italy at 40%, the US at 34% and Hungary at 29%.

The post The 50th anniversary of the ATM – The truth about Cash appeared first on Payments Cards & Mobile.