Long before most banks launch new branch designs, tablets will be commonplace in legacy bank branches in an effort to improve customer engagement.

In a new report, Celent examines banks’ near- and medium-term branch channel objectives, recognizing that larger transformation initiatives will be years in the making. 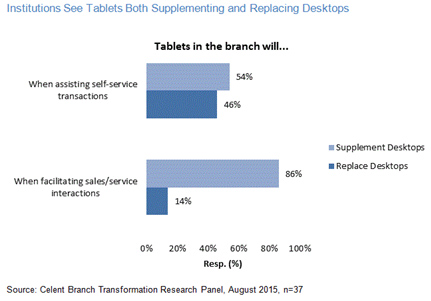 branch personnel would be “extremely likely.” The August 2015 survey explored how tablets would be used and found that institutions are planning to both supplement and replace desktops. Tablets will soon be used to facilitate sales and service interactions as well as to assist self-service transactions.

Banks face many obstacles, however. Chief among them is a lack of tablet readiness among vendor branch automation software applications.

“Tablets will quickly become a common fixture in the branch,” says Meara. “But, with most software platforms not yet tablet-ready, usage will initially be limited to simple tasks.”

Several additional insights from the research include: