State of the Blockchain: NFT’s explode onto scene in 2021

The NFT market has seen exponential growth in 2021. In order to capitalise on the demand, investors are giving more attention than ever to start-ups in the category.

At the beginning of 2021, only a niche group of crypto enthusiasts knew what non-fungible tokens (NFT) were. But by the end of the year nearly $41 billion had been spent on NFTs, according to the latest data, making the market for digital artwork and collectibles almost as valuable as the global art market.

NFT’s represent digital assets or virtual goods — which can range from images to songs to videos to tweets — that are verified through blockchain technology.

In March 2021, digital artist Beeple sold an NFT of his work “Everydays: The First 5000 Days” for $69 million through a first-of-its-kind auction at Christie’s, driving unprecedented attention to the space.

The sale was followed by a number of highly-priced NFTs, including the sale of an 8-bit CryptoPunks artwork (produced by Larva Labs) for a staggering $532 million in October.

As sales drove more attention to NFTs, the capital followed, resulting in record-high funding and deals to start-ups enabling the creation, exchange, or sale of NFTs.

“This year witnessed the NFT market explode from a sub-billion-dollar market to a multi-decabillion industry,” said Mason Nystrom, research analyst at crypto data group Messari, adding that buyers were rushing to uncover art that aligns with their “digital identities”.

Though first popularised in the art world, corporate players from sports and music — even former US first lady Melania Trump — have also embraced the concept to cash in on the hype and find new ways to engage with fans.

The NBA, the US basketball league, created its own NFT marketplace for buying, selling and trading video highlights of its players called NBA Top Shot.

Other hits included numbered collections of NFTs that went viral, including CryptoPunks and Bored Ape Yacht Club, and which denoted the clubby status of their owners and are used as avatars on social media profiles.

“They are country club-esque: there is a high barrier to entry — a capital cost — and you are around high net worth and other individuals,” he added.

In total, $40.9 billion was poured into the ethereum blockchain contracts that are typically used to create NFTs in the year to December 15, according to Chainalysis, a crypto analytics group.

The total would even be higher if it included NFTs minted on other blockchains, such as solana.

By comparison, last year the global art market was worth $50.1 billion, according to figures from UBS and Art Basel. 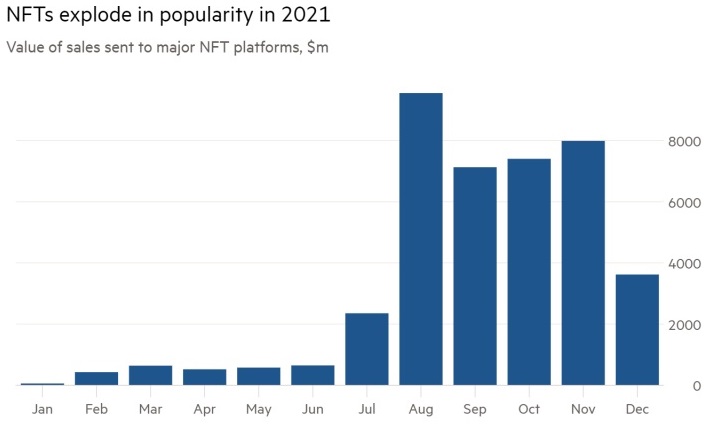 Already, the so-called financialisation of NFTs is taking place in some communities — for example, using NFTs as collateral for loans, or breaking down ownership of a single piece into smaller parts, known as fractionalisation.

In the longer term, enthusiasts hope tokens will one day power e-commerce in any metaverse or metaverses, futuristic digital avatar-filled virtual worlds. Here, NFTs could designate ownership of virtual goods, be that clothing for digital avatars or art for the walls of their digital houses.

Nike recently announced that it had bought a virtual shoe company to mint virtual sneakers.

Either way, the future of the NFTs market will also depend on the stance that regulators take as the freewheeling market develops.

There are concerns, even among corporate issuers, that NFTs share characteristics with certain digital investment vehicles and therefore may be considered securities by regulators.

Devika Kornbacher, partner at Vinson and Elkins, said companies looking to issue NFTs regularly ask: “Is this NFT going to be viewed as a financial instrument? Will it be considered a security from our company?”

Meanwhile, tax agencies such as the Internal Revenue Service are yet to address NFTs directly, but some experts argue that they could be deemed “collectibles”, meaning they would be subject to capital gains taxes,” said Pratin Vallabhaneni, partner at White & Case, of impending regulation. “It is a looming existential issue for the whole industry.”

The post State of the Blockchain: NFT’s explode onto scene in 2021 appeared first on Payments Cards & Mobile.