The Chinese economy is slowing but Singles Day shoppers still went for it online and drove Singles Day sales up to more than $10bn on Alibaba by 2pm on Wednesday, beating last year’s record of $9.3bn.

Singles Day is the biggest shopping frenzy in the global calendar; the $5bn of sales recorded in the first 90 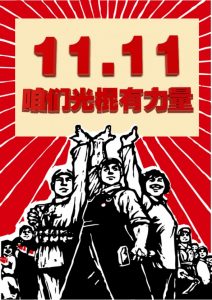 The day is critical for the Chinese ecommerce group, which went public in September 2014 in a $25bn initial public offering — the largest on record — but has since disappointed investors.

Alibaba stock fell 40 per cent from November 2014 to September 2015 and slipped below its IPO price of $68, although the shares have rallied since September to $81 on Tuesday.

Slowing growth in revenues and gross merchandise value — which has slipped from more than 50 per cent year-on-year in 2014 to roughly 30 per cent in recent quarters — has fed the perception that the company’s best days are behind it. Alibaba has worked to find a new growth strategy as they hit the limits to pure e-commerce, moving into “omnichannel” marketing that mixes online and offline sales.

Alibaba said it would feature 6m products from 30,000 brands sold by 40,000 merchants. It said that in the hours leading up to Singles Day, 130m users had logged on to its shopping sites, more than in the same period last year.

Singles Day, named for the numerologically auspicious double 11 date, traces its history from a casual holiday started in the early 1990s as China’s “anti-Valentines Day” — a holiday to celebrate singledom, where people are encouraged to treat themselves. In 2009, Alibaba launched the Singles Day online sales as a festival of conspicuous consumption.

Retailers offer significant discounts on the day, often under pressure from e-commerce sellers such as Alibaba, in exchange for promotion on their shopping websites.