Segmenting US banks: Focus on card issuing and presence of acquiring

Within the US, 660 bank holding companies associated with regulated depository commercial banks and savings banks exist with $1 billion or more in assets according to data sourced from SNL.

These banks were segmented by total assets as of March 31, 2017. Figure 1 depicts prevalence of consumer credit card programs and merchant acquiring programs among these segments. 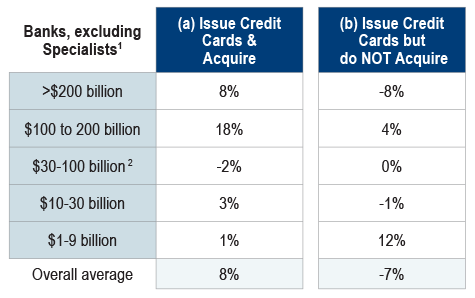 For banks that issued cards and acquired, growth in credit card balances was observed to be significantly higher overall (+8% versus -7%) and within three of the bank segments: >$200 billion, $100 to 200 billion, and $10 to 30 billion.

One may speculate that banks that issue and acquire may be more strategically focused on card payments generally and that certain synergies may exist or be possible between issuing and acquiring lines of business. Looking forward, these synergies could become more prominent as broader forces, such as e-commerce and FinTech, have an increasingly pronounced impact on traditional models heretofore deployed for cards-related businesses.

The post Segmenting US banks: Focus on card issuing and presence of acquiring appeared first on Payments Cards & Mobile.