Russia has launched its own domestic payment system, aiming to boost its financial independence and compete with international payment systems such as Visa and MasterCard.

The launch of the Russian bank cards—branded Mir, which means “peace” or “world” in Russian— 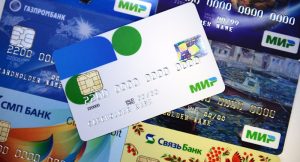 represents a belated response to Western sanctions that interrupted the processing of some Russian payment transactions in March 2014. Russia has for years considered creating its own local payment system, but the concept gained little traction until the Kremlin endorsed the idea following the annexation of Crimea last year.

The peninsula, home to two million people, has faced problems with its banking system since it was annexed from Ukraine. Only a few banks operate there, and cafes and stores in the resort area haven’t been able to accept international bank cards since Visa and MasterCard services were halted.

The Bank of Russia and the National Payment Card System presented the freshly minted cards on Tuesday, saying that the move will bolster Russia’s financial sovereignty. Bank Rossiya, SMP Bank and RNKB Bank—all of which are on the Western sanctions list—will be among the first Russian lenders to issue the plastic cards. Russia’s largest lenders, Sberbank and VTB, also joined the national payment system.

“The aim of NPCS was to ensure issuance and operation of cards in Crimea,” said Olga Skorobogatova, the Russian central bank’s deputy governor.

Ms. Skorobogatova described having the card as an act of patriotism, as well as a display of trust in national values. The Russian government has allocated 4.5 billion rubles ($64.2 million) to issue the cards, which look similar to international bank cards and feature a Mir logo in the left corner.

Last year, the push for a new payments system gained momentum after Russia’s parliament passed a law designed to force Visa and MasterCard to keep hundreds of millions of dollars at the Bank of Russia as a collateral against a possible freeze. This draft law raised concerns that the companies would leave Russia, causing massive disruptions in the crisis-hit economy. But both Visa and MasterCard said they would like to continue operations and, after the law was amended, reached an agreement with Russian authorities to continue to process payments in Russia.

The central bank plans to promote the cards among state employees in 2016, and further into the future have them become a globally accepted means of payment.

Russia will also issue the new cards together with global companies, such as Maestro, so a cardholder will be able to use the card at home and abroad.

Despite the growing popularity of noncash payments, Russians still prefer to use cards to withdraw money from ATMs, according to a central bank study. More than 64% of Russians had at least one bank card in 2014.