Report: The future of US mobile payments

The future of mobile payments, both in the US and around the world, will likely be determined by the success of the OEM Pay wallets.

Data from Juniper Research indicates that there will be 450 million OEM Pay wallet users worldwide by 2020 (including but not limited to Apple Pay, Google Pay, and Samsung Pay), spending over $300 billion using their mobile devices – according to The State of Mobile Payments in 2019.

The Statista Digital Market Outlook estimates that by 2020, total mobile contactless POS payment transactions will exceed $1 trillion worldwide and $115 billion in the US.

“Early adopters” can serve as effective grassroots promoters for the new technology. And as mobile wallets continue to enable P2P payments capabilities (currently Apple Pay and Google Pay offer peer-to-peer payments), they create opportunities for early adopters to broadcast mobile payment technology to their social networks and introduce it to their friends and family as a trusted source.

From 2016 to 2022, mobile payment transaction volume in the US is projected to grow 36.6% year over year. While this is a substantial increase, the rate of growth in mobile payment volume is actually tapering off and will continue to do so over the next few years.

Although we are still in the early stages of adoption, the sheer size of the US market means that there is a substantial base of mobile payment users already. eMarketer reports that 55 million US consumers used their phone to make a payment at a physical POS last year. 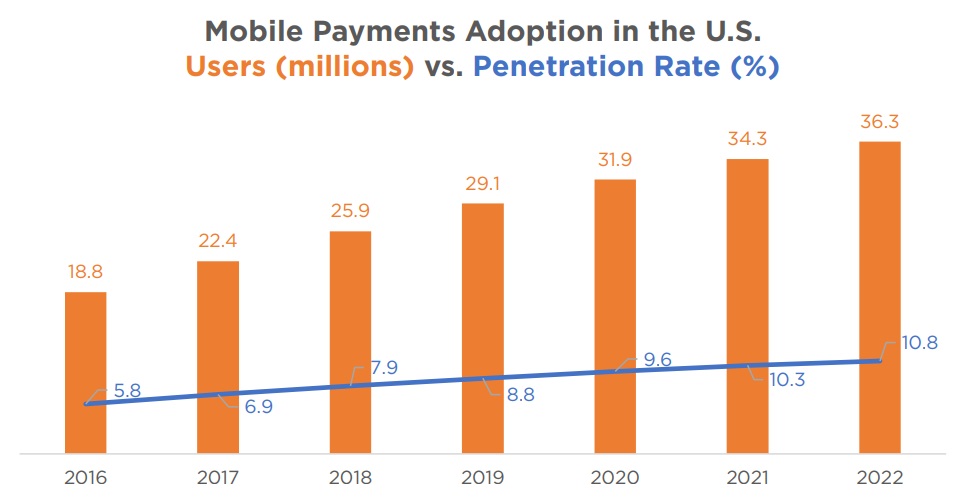 This includes all types of proximity mobile payments, including cases in which the user pre-loads funds into an app and uses that balance to pay at the POS (this is generally how the Starbucks mobile app works, for instance).

Closed-loop mobile applications like these are often tied to loyalty and rewards programs offered by specific retailers.

Open-loop mobile wallets work by using a digitally stored credit or debit card or, in some cases, by triggering an online bank transfer. They are referred to as “open-loop” because they do not require the user to have a pre-existing balance in the mobile wallet – they can be used just like a credit or a debit card.

There were 26 million active users of open-loop mobile wallets in 2018, according to research firm Statista, representing about 8% of the total population and 11% of smartphone owners.

US consumers spend more money using their mobile devices than any other country except China. In 2018, mobile payment transaction volume in the US reached $64 billion – a tiny fraction of total consumer spending (about $40.5 trillion in 2018), to be sure – but second only to the $414 billion in mobile payment volume in China.

The post Report: The future of US mobile payments appeared first on Payments Cards & Mobile.