In a new report based on the usage of ATM’s in three countries, US, Australia and UK it finds that ATMs remain popular globally, with 82% of respondents reporting that they used these facilities, however, the survey uncovered some stark differences in usage between the surveyed territories. 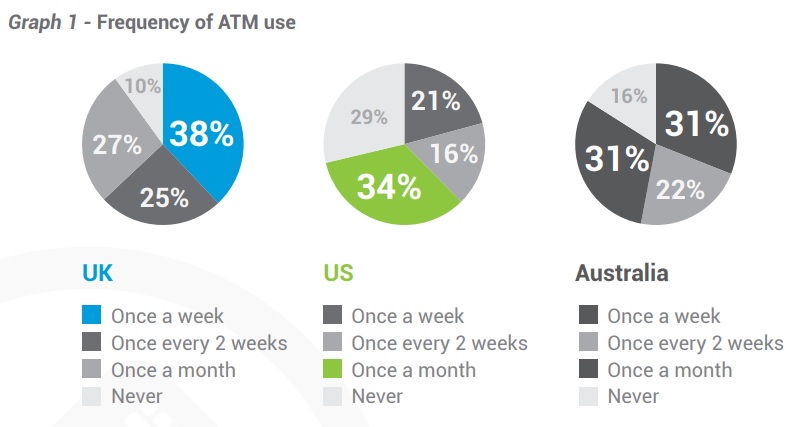 Our survey asked respondents how often they typically used an ATM to withdraw cash, check their account balance, change a PIN, top-up their mobile phone, etc. In the UK the most popular answer was once a week, while US respondents elected for once a month. Australians were split between these answers.

When reviewing how this has evolved from data obtained in our 2015 survey, we see that the US and Australia are witnessing a shift in usage patterns. In 2015, all three countries consistently reported ‘once a week’ as the top answer, but in the 2017 data set we can see a move to less frequent usage in these two countries.

The US has the largest number of respondents – 29% – who reported that they never use ATMs, this is higher than the 21% who gave the same answer in the US in 2015.

60% of respondents that said they used ATMs said they only did so to withdraw cash, they do not use any of the additional services available.

When looking at the responses by age, we see the younger age groups appear to derive more value from ATMs by using a wider range of services. In the UK 53% of 18 to 24 year olds said they used ATMs for more than just cash withdrawals and in Australia 43% of the same age group reported this.

One in four respondents said they would be happy to pay a small token charge to obtain money from an ATM which was based at a convenient location, such as a restaurant or entertainment venue. US adults appeared most acceptable to this overall, but when contrasting with the data obtained from our 2015 survey it shows US acceptance declining, while UK adults appear slightly more open to a token charge now. Age appears to influence consumer willingness to pay a charge with those aged 25 to 34 years across the US, UK and Australia being the most accepting.

As expected, a proportion of the survey respondents reported that they never use ATMs. We took this opportunity to explore their reasons for not using this technology and found the most popular answer to vary in each country.

ATMs continue to be targeted by criminals and consumers appear to be only too aware of this. In Australia we saw heightened levels of concern regarding ATMs being safe when we contrasted our 2017 findings with those gathered in 2015, however, UK respondents remained the most worried.

Concerns that personal details could be stolen was also a popular answer, however, the US saw a drop in the number of people who chose this as a reason when compared to our 2015 data. In 2015 the US appeared the most concerned about this risk, but in 2017 they are the least concerned of the three countries surveyed.