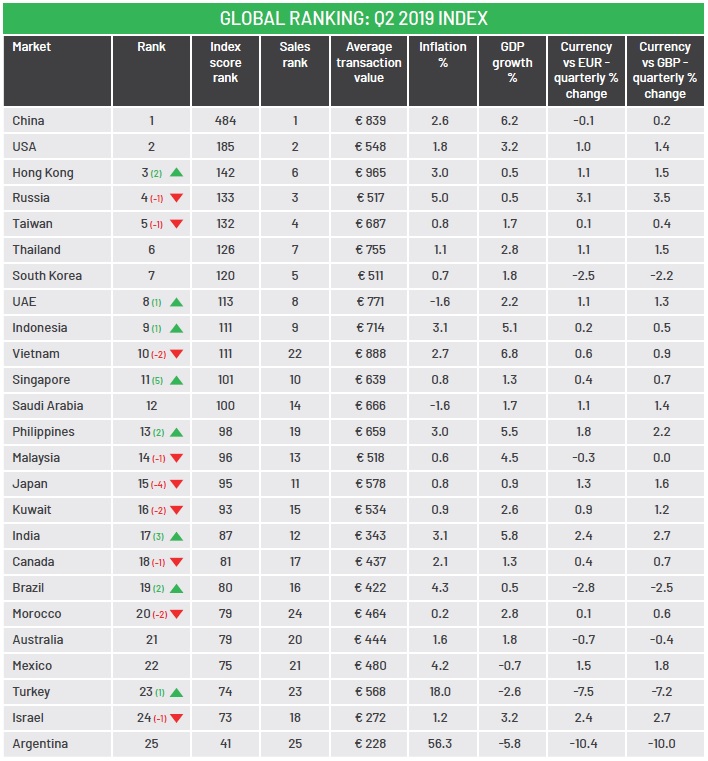 The figures from the latest Planet Shopper Index – a composite measure which combines retail sales and economic data to rank the 25 most active international shopping nations in Europe – saw shoppers from the US register the biggest score increase, placing them second in the table behind global shopping giant China.

Fears of a manufacturing recession and growing threat of a trade war with China do not appear to be hitting US consumers’ wallets,[1] especially as the dollar continues to strengthen against the euro and pound.

Planet figures reveal that Tax Free retail sales to US shoppers grew by a double-digit rate for 14 consecutive months, showing a 15% year-on-year increase in July and reaching growth of over 30% earlier in the year.

The sales figures, combined with US GDP growing by 3.2% in the second quarter, healthy levels of inflation and a strengthening currency saw the United States register a bigger Index score increase than any other market.

Overall international shopper activity across Europe’s retail destinations also accelerated during the second quarter of the year, driven not only by the gains in US shopper spending but also by an uptick in activity from APAC emerging markets India, the Philippines, Thailand and Indonesia.

Despite slowdowns from major luxury spenders China and Russia, the median score of the latest Planet Shopper Index rose by three points, to 98.

Non-EU shoppers spend 3.7 times that of their domestic counterparts and therefore present a major opportunity for European retailers. This data is further good news for Europe’s retailers, who are increasingly looking to drive international shopper footfall into their stores as domestic bricks and mortar spend slows.

While incumbent international shopper heavyweights China and US still remain the top performing source markets in the Index, APAC emerging markets are hot on the heels of these traditional luxury spenders.

Persistent economic development and a growing middle class has driven forward spending power of nations such as Philippines, Thailand and Indonesia – with European retailers beginning to reap the benefits. Thailand saw its Index score rise by 7 compared with the previous quarter, with the Philippines and Indonesia following on with 4 and 3 points respectively.

Leading the pack of emerging nations is India, whose index score rose by 8 in Q2 – the second biggest climber in the league table. As the world’s fastest growing major economy, shoppers from India are well poised for international travel and spending. No better was this evidenced than at the ICC Cricket World Cup, hosted in the UK this year, which saw an additional 80,000 Indian nationals visit the country, with Tax Free sales booming by 18% in June.

With a particular penchant for luxury brands, purchases in this category account for 42% of spending by Indian shoppers in the UK. This is more than Chinese and Gulf Co-Operation Council (GCC) shoppers – traditionally seen as Europe’s biggest luxury spenders.

India is now one of the fastest growing outbound tourism markets in the world and by 2020 will account for 50 million outbound tourists, according to The United Nations World Tourism Organization (UNWTO).[2] Planet’s Tax Free spending data shows that sales to Indian shoppers in the UK have grown for four consecutive years.

“The latest index data highlights a really exciting opportunity for European retailers. With wealth levels rising in countries across the world, we are seeing the European retail sector’s customer base expanding in line with a rising global middle class,” says  David Perrotta, UK Country Manager of Planet.

“In order to take full advantage of this, retailers need to ensure they are ahead of the curve when it comes to understanding not only who their customers are, but how to engage with them,” commented

[1] PBS – Why are We Talking About a Recession? Economists Weigh in