Report: Do we really want a cashless society?

Travelex has released a study into attitudes towards cash and other payment technologies: Do we really want a cashless society?

The study, which looks at cash and cashless technology usage in four markets—the UK, Australia, Brazil, and South Africa—shows that a cashless society may not be a realistic ambition. In fact, the survey revealed an “immovable” 24% of consumers who will never abandon cash—no matter what technological advance or leap forward is available to them. 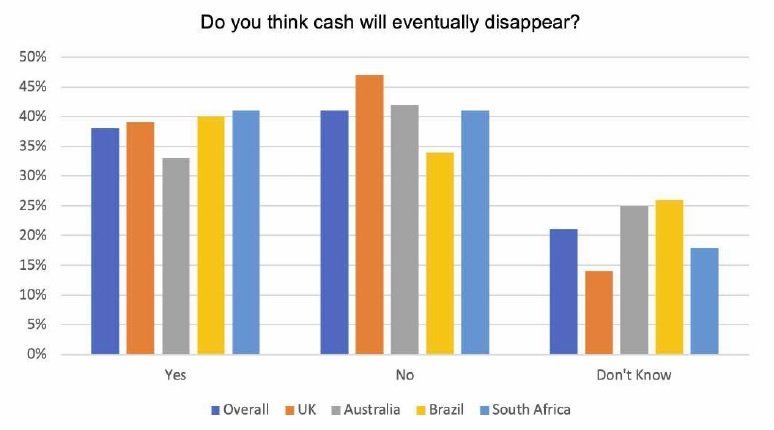 In Brazil and South Africa, where cash use is more common, there is a strong desire for wider acceptance of cashless technologies such as payment cards and digital wallets. In both markets, 60% say that they are worried about having cash stolen from them which suggests fear of theft is a key driver rather than convenience.

In the UK and Australia, however, where the use of cashless technologies is more widespread, people are happier with their use of cash. Around 80% of people in both markets say that they are comfortable using cash.

Respondents across all countries saw cash as part of their day-to-day lives. They carry cash at all times, replenishing their wallets and purses regularly at ATMs, and are unwilling to go that last extra mile and never use cash again. 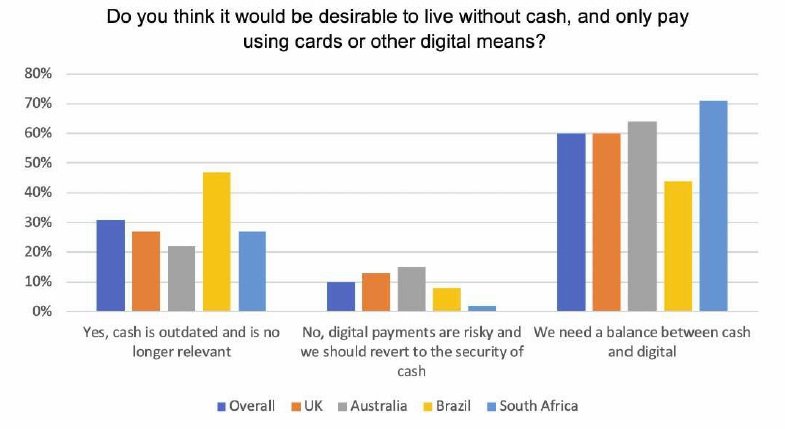 The findings suggest that cashless technologies will not replace cash completely; instead people are happier with an equilibrium between the two.

“While the proliferation of cashless payment technologies has generally led to a reduction in cash usage across developed economies, banknotes have unique properties that consumers value, such as security against fraud,” said Michael Batley, Head of Strategy, Travelex.

“As long as this is the case it’s unlikely that any attempts to abandon cash completely will succeed. Even Sweden’s bid to go cashless, touted as a successful model, has seen pushback. Ultimately, only consumer demand will drive the change towards a truly cashless society and our research indicates this is further away than many realise.”

As well as revealing a lack of appetite for a cashless society, the study also reveals that opinion is split on whether it is even possible. The UK, the most ‘cashless’ country surveyed, represented the highest proportion (47%) of respondents that do not see an end to cash, closely followed by Australia (42%).

The post Report: Do we really want a cashless society? appeared first on Payments Cards & Mobile.