Amid hype about alternative payments and digital currencies, prepaid cards are booming – with growth projected to run faster than e-commerce world-wide over the next ten years. Payments Cards & Mobile examines the how and why of prepaid cards, the darker side of their success, and what happens next.

Prepaid cards might be the mid-table sports team of the payments industry: not much written about, not in danger of disappearing, yet never moving much beyond the edges of attention. One hesitates to describe them as “dull but worthy” – yet they are a part of our business that makes little noise, perhaps because they have been around since the early 1990s.

A brief review of the growth numbers  shows that they deserve more pixels and column inches than they get at the moment.

Worth around $1.5 trillion in turnover for 2019, the global pre-paid market is expected to exceed $5.5 trillion dollars turnover by 2028 for a compound growth rate of 22.5 percent per year, according to Allied Market Research. 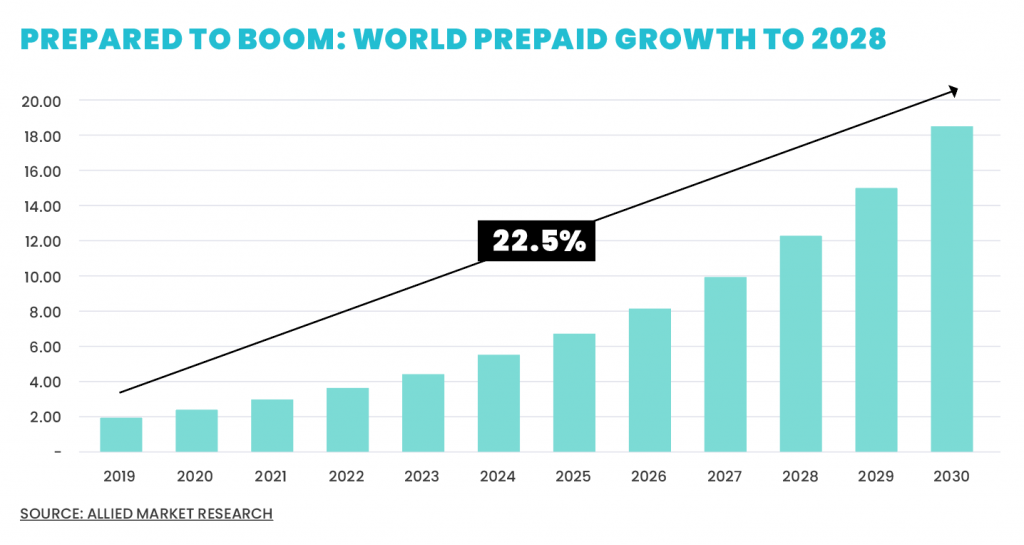 North America represents the largest slice of this market, at around $466.2 billion, but is set for relatively anaemic growth of around four percent in the next ten years.

By contrast, analysts say pre-paid cards in Asia-Pacific will grow by more than 16 percent per year over the period, with the global market projected to reach around $18 trillion by 2028.

For the avoidance of doubt, these figures make pre-paid cards a faster-growing payments vehicle than debit cards or credit cards. Indeed, if these growth projections are anywhere near accurate, the prepaid segment is growing faster than e-commerce; only digital wallets can match this kind of growth.

Hot right now – and how

Most recently, the growth in prepaid cards during the pandemic can be pinned to governmental use of prepaid to deliver COVID-related benefits.

In the US, more than $3 billion is distributed in benefits every month, with 3.5 million cards in issue and a further 275,000 prepaid cards issued every month.

Prepaid cards reduce risk by limiting the amount that can be spent to the amount loaded on the card; at the same time, spending patterns can be tracked and spending at certain merchant categories prohibited or limited, making them a good vehicle for the delivery of government benefits.

Naturally, some civil liberties campaigners – most notably in Australia – have taken a strong view of proposals to limit where dollars delivered via benefit card can be used.

Another hugely popular category for prepaid, especially in North America and Asia, is the use of so-called “closed loop” prepaid cards for gifts and retail shopping.

“Closed-loop” cards are limited either to a single retailer or retail group, and can be reloaded by the person receiving the gifts.

The capacity to reload makes these cards a powerful ongoing sales vehicle from a retailer point of view; 2020 research from Mercator reveals that 40 percent of those receiving gift cards in the US chose to reload them at least once in the twelve months following activation; and that one in five recipients were still using prepaid cards more than a year after receipt.

“40% of those receiving prepaid gift cards in the US reloaded them at least once.”

Prepaid cards are quick and easy to use and represent lower risk than traditional credit and debit cards since spending is limited to the amount loaded on the card.

Another advantage, from the merchant perspective, is that issuers of prepaid cards do not require banking licenses to offer prepaid to customers, especially in “closed-loop” environments.

The absence of any bank as an intermediary in a closed-loop system also means retailers pick up the full amount of any retail sale via prepaid, rather than lose up to 2.9 percent of sales value to interchange fees.

Best of all from a retailer perspective is that pre-paid cards can be used online and in-store, making spending patterns, likes and dislikes all simple to track.

“Retailers get the full benefit of sales on prepaid cards.“

Prepaid’s stratospheric growth in Asia can be partly attributed to the appeal of such “open loop” cards to the region’s large unbanked population: for the unbanked, prepaid cards function like a bank account, with value being reloaded onto the cards at retailers or by employers, then spent at retailers like cash.

Aside from gift cards, the use of prepaid cards for corporate expenses or to disburse salaries has been a major avenue of growth in recent years.

The dark side – and how to avoid it

Great growth, low risk and wide popularity in a variety of use cases – if this mix sounds too good to be true, then readers would not err in being suspicious.

The very convenience and speed of prepaid cards – when coupled with their relative anonymity – makes them a tempting target for fraudsters.

Writing in late 2020, Canada’s Globe and Mail reported that global fraud losses on prepaid cards totalled $27.85 billion in 2018, and could reach as high as $40.6 billion by 2028 – between one and a half and two percent of total annual spending on prepaid cards world-wide.

In 2019, CBS News reported that as much as three percent of gift card dollars in the US are never redeemed because they had been lost to fraudsters. That amounted to roughly $3 billion that year alone.

For the last ten years, prepaid cards – especially those sold for specific use on mobile telephony networks – have been a favourite vehicle for Latin American drug gangs seeking either to launder money (by using the cards as a kind of cash-equivalent cross-border barter system) or render their mobile communications untraceable by stealing phones and using them in conjunction with fake or stolen prepaid cards.

The United States’ FinCen (Financial Crime Agency) has recently proposed changes to the Bank Secrecy Act to limit the amount of dollars that can be loaded onto prepaid cards, especially in “open-loop” systems, while expanding the responsibilities of those issuing prepaid cards to include  mandated Anti-Money Laundering (AML) and Know Your Customer (KYC) responsibilities for retailers.

Jennifer Tramontana, who represents the Canadian Prepaid Providers Organisation, says: “There’s a perception that prepaid debit cards have a “lighter” KYC requirement, but this isn’t the case.

Processors can track loads by individual transaction types and limit or prevent particular types of transactions from coming into the system.

The same controls apply to the money in/out process or cash in/out process. They have specific parameters to prevent suspicious transactions, as well as new AML regulations to help clarify any gaps.”

If you combine all of these areas, we see fraud losses [on prepaid cards] at around 3-5 basis points, where the industry average is around 8-9 basis points.”

It may be that Galileo are citing figures from their own transaction base, since a 2019 report from the US Federal Reserve notes: “Across all debit and general-use prepaid card transactions for covered issuers, fraud losses to all parties as a share of the transaction value were 11.2 basis points, or $11.20 per $10,000 in transaction value, up from 10.3 basis points in 2015.” – in other words, official government figures suggest a loss rate some 20-30 percent higher than that found in other card products.

The US Fed report also noted that much of the increase in pre-paid fraud it had observed came from online transactions; and that new liability arrangements meant that merchants were absorbing more than half of these losses – good news for the payment systems and banks behind the cards, not so good for the retailers.

There’s no question that the limited value stored on prepaid cards helps to limit fraud liability by simple virtue of the fact that no more than the stored value specified on the card can be spent.

Looking to the future, major prepaid industry players like FSS and Altair believe the prepaid card could be used as one factor in a multi-factor authentication scenario that both limits liability and enables spending across a range of use cases.

In such a scenario, a prepaid card would be used alongside a mobile device and PIN or biometric factor such as fingerprint ID or Face ID to provide three-factor authentication in m-commerce situations such as event and transport ticketing, restaurants and retail.

Transaction amounts would be limited to the amount spent on the card.

While this is an entirely plausible and useful scenario, it’s just one possible solution to the fraud challenge faced by the prepaid segment. In common with the whole of our industry, only perhaps somewhat more so, the challenge of how to prove user ID conclusively in a wide range of use cases is going to be crucial to the continued success of the prepaid segment in the years to come.

There’s no doubting the levels of consumer demand, or the industry’s capacity to supply these cards – but it would appear more work remains to be done to combat fraud before the huge gains in usage outlined at the top of this article become reality.

Prepaid fraud and how to stop it

Fraudsters have perpetrated five main fraud types with prepaid cards. As this article notes, solving these fraudulent activities is going to be important if the prepaid segment is going to continue on its current growth trajectory. The main kinds of fraud on prepaid cards are:

Fraudsters call merchants claiming to be from a POS manufacturer and needing to test the prepaid function on their terminals. They acquire the merchant’s PIN code and use it to execute transactions on stolen prepaid cards.

Fraudsters steal unactivated cards loaded with cash and replace them with fake cards with no value. Once the fake cards are activated, fraudsters use the value on the cards they have stolen to cash out money from ATMs using codes they hold for the fake cards.

Fraudsters steal bank account information and use that account to buy prepaid cards, load these with cash from other criminal activities and use the cards to launder money through retail purchases

Faudsters steal the magnetic stripe data from a genuine prepaid card and transfer it to a fake, then use this card for retail purchases.

For all of these fraud types, there’s a need to better authenticate users both when prepaid cards are purchased (e.g. provision of two forms of identity or, online, two-factor authentication) and also at point of use, either in person or online.

Many in the card industry believe it’s time for security experts to be involved in both the design and production of new prepaid products to make them less susceptible to fraud.