There are growing fears in the industry that post Brexit, the UK will lose the passporting rights that allow financial services companies licensed in one EU state to provide services across the bloc, rather than having to win licences in individual countries. 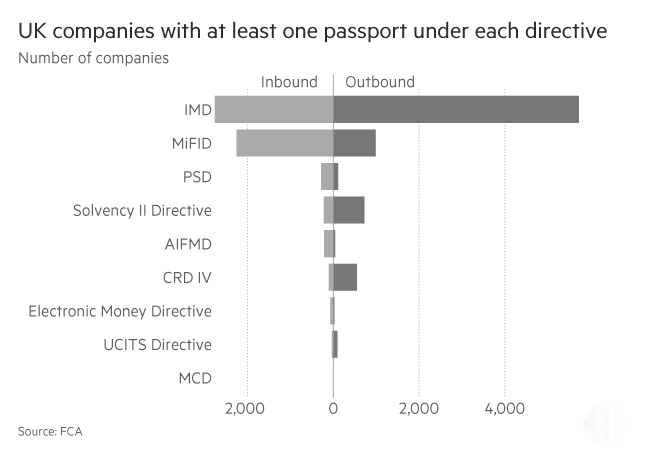 figures showing that 5,500 UK-registered companies rely on “passports” to do business in other European countries.

However, data released by the UK’s Financial Conduct Authority, show that nearly 5,500 UK registered companies use passports to access the EU market, while 8,000 companies registered elsewhere in the EU use the system to access the UK.

The fact that there are more companies relying on passporting to do business in the UK than the other way round could boost the case that the EU has as much to lose from restricting UK access to the single market.

The UK accounts for 40% of Europe’s assets under management and 60 per cent of its capital markets business, according to a recent report for the British Bankers’ Association by the law firm Clifford Chance and the consultants Global Counsel – according to the Financial Times.

The passports cover a range of activities, including investment banking, corporate lending, insurance, payments and asset management. Richard Eglin, senior trade policy adviser at law firm White & Case, described financial services passports as “the one thing where they [the EU] have the UK over a barrel”, adding: “They will extract a high price for whatever they give Britain on that.”