Poland’s Idea Bank is launching a fleet of automobiles fitted with ATMs which can be ordered by smartphone. 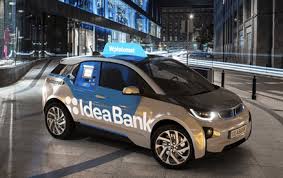 The bank has fitted four electric BMW i3 automobiles with built-in cash depository ATMs that can be called upon by small businesses using the IdeaBank Money Collection app.

Entrepreneurs can also make an advance bookings by entering the desired time and location of the service delivery and observe the car’s current position on a map.

According to research conducted by Idea Bank, one in three business owners use only cash transactions, and the remaining two use both cash and different methods of payment. Around 80% of respondents deliver their money to the bank in person, often doing so in the evening hours.

The first vehicle has already been launched in Warsaw with newer shipments allowing Idea Bank’s clients to deposit and withdraw their money. Depending on popularity, the service will be extended to other cities across the country. The project was developed in partnership with iTaxi, which developed the mobile booking app available for Android and iOS.