Paypal continues dominant growth but can it be sustained?

Since being shown the door by eBay back in 2018, PayPal, once the most innovative digital payments companies in the world has continued to perform well and dominate the space – but despite the headlines and in light of competition, can this trend continue?

Despite the firm clocking in 17% growth in total active user accounts from 2018 to 2019, its main partner, eBay,  dropped it as a payments processor, selecting Adyen. As of 2014, eBay accounted for 30% of PayPal’s revenue while making up over 50% of its profits.

PayPal released Q1 2019 results that showed rising sales and profit but a decline in payment volume growth, a closely watched measure of the company’s popularity among customers.

It met analysts’ expectations for revenue and exceeded them for per-share earnings last quarter. On a conference call after the report, PayPal said it was pleased with plans to make money from Venmo app, although it didn’t offer specifics.

For the first time, PayPal disclosed the number of people active on Venmo, or those who have made at least one transaction in the past 12 months: 40 million. Venmo is on pace to generate $300 million annually, with the company adding that the platform processed $21 billion of payments in Q1, up from $12 billion the year before. 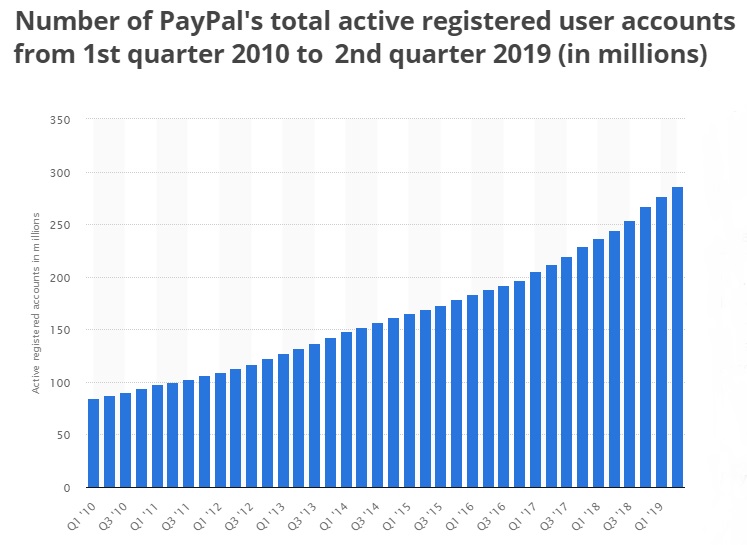 Even still, the growth rate in payment volume across the company’s services slowed. The volume was $161 billion, a 22% increase from the year before. The growth rate was 23% in the previous quarter and 32% a year ago. PayPal expects to have 300 million active users across its properties by the end of the year.

One factor that might see the writing on the wall for PayPal is its ever-increasing merchant processing fees. One of the objectives that prompted eBay to end its partnership with the firm – apart from increasing its revenue – was to reduce such costs.

But since then, PayPal has announced an increase in merchant processing fees to a flat 2.9% plus $0.30 on domestic transactions in the US. If you are a seller receiving funds that come from countries apart from the US, you will be charged a much higher transaction cost of up to 4.4% plus a fee that will vary depending on the country the funds originate from.

While this adds to PayPal’s annual revenue, it mostly affects the middle-class businesses that are neither the largest nor the smallest segment of the merchant account class. PayPal merchants are left with no alternative but to incur higher charges.

To put this in context, the average credit card processing cost for a brick-and-mortar retail business is roughly 1.95% to about 2% for Visa and Mastercard transactions. This means that merchants will be expected to pay 0.25% plus $0.10 per transaction. So, a $100 transaction will cost the merchant about $0.35.

Although this is a rough estimate, it illustrates just how high PayPal’s charges are in contrast with credit card companies. 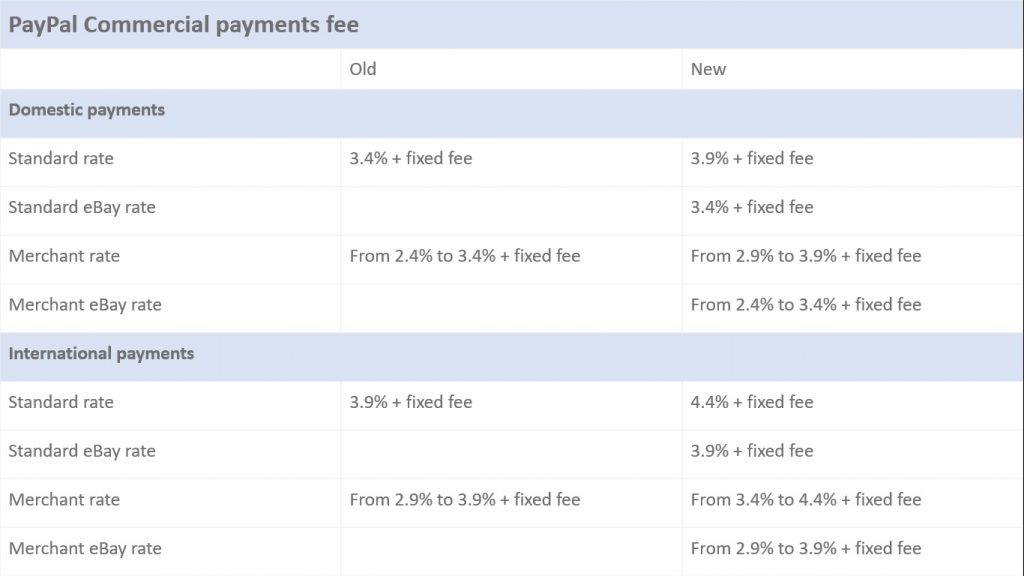 Even though cryptocurrency might be accepted by a minority of vendors due to its volatile price and lack of widespread adoption, it still poses a threat to PayPal.

Cryptocurrencies operate on a principle that goes against PayPal’s intrinsic business model. While PayPal seeks to become a profit-oriented third party with every online transaction, crypto aims to eliminate the third-party business model altogether.

You might argue that at its highest, the fees charged by digital wallets like PayPal are much lower when compared to what banks and other financial institutions charge. However, if you consider Bitcoin’s case, a user can pay nearly no fees.

As such, a possible avenue for PayPal is to explore cryptocurrency and blockchain solutions. In the past, the firm declared interest in integrating digital currencies on its platform, however, its current stance is more focused on blockchain rather than on cryptocurrency and the threat these technologies pose to the likes of PayPal is worth watching but unlikely to occur soon.

While creeping operational costs and the release of PayPal’s Q2 2019 earnings report in July sparked a stock sell-off, a closer look at its operational success allayed investor fears. The report showed that the company added 9 million new active accounts in Q2, an increase of 17% year over year.

The One Touch service, allowing users to stay logged in for faster checkout, has been a success on mobile, with more than 10 million merchants using the service. The payment gateway is able to demonstrate increased conversion rates for merchants using One Touch on mobile, so there’s a strong incentive for internet retailers to use the service. As a result, mobile payment volume increased by 45% for PayPal in Q3 2018.

The company has recently reported revenue of $4.31 billion, up 12% year over year. It maintains that its growth areas will more than offset the loss of users coming from its break with eBay after 2020.

Regardless of the above factors, PayPal is still a dominant player in e-payments. However, if the firm ignores competing technologies and continues to increase fees users, who have been increasingly educated on fees by the interchange headlines in mainstream press, will likely switch to competitors and alternatives.

The post Paypal continues dominant growth but can it be sustained? appeared first on Payments Cards & Mobile.