The US Court of Appeals overturned the landmark antitrust interchange settlement between retailers and Visa and Mastercard on June 30, 2016, reigniting more than 10 years of legal battles over network rules, card acceptance and processing fees.

The Journey So far

The initial litigation was filed in 2006 (see Figure 1) by a class of 14 million merchants against Visa and Mastercard – writes Joshua Gilbert, Partner and Emma Causey, Senior Consultant, Payments Strategy and Innovation, First Annapolis.

The suit alleged that the networks, in concert with their member banks, agreed to set, apply, and enforce rules related to merchant fees and card acceptance. Specifically, merchants contested:

Visa and Mastercard agreed to settle with the merchants in 2012 for $7.5 billion in what was estimated to be the largest-ever antitrust deal in the US.

As part of the settlement, both Visa and Mastercard made broad rule changes to allow merchants to impose a surcharge on credit card purchases, effectively eliminating “anti-steering” clauses (note that this rule change does not apply in 10 states that expressly forbid merchant steering via customer surcharging).

The US Court of Appeals, in its most recent decision, found that the second class of merchants was inadequately represented, and overturned the settlement in its entirety.

The Court’s decision comes at an interesting time. Prior to the settlement being overturned, tensions between merchants and the networks had showed signs of easing.

Though there had been several public disputes filed by brand name merchants in 2013 and 2014, retailer lawsuits against the networks had slowed (see Figure 3).

Moreover, in early 2016, the networks made headlines with announcements of the under-$25 EMV liability shift and limits to total chargebacks, measures designed to assist merchants in their conversion to EMV terminals. The Court’s decision, however, pits merchants against the networks once again, and portends an ambiguous future. 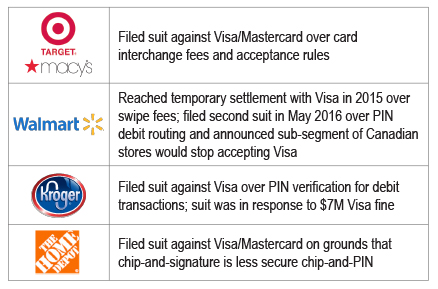 Specifically, the overturned settlement reignites the battle over credit interchange. Going forward, merchants may push for legislation to control credit interchange rates, much like the Durbin Amendment to the Dodd-Frank Act did in 2010, although any regulatory action on interchange may depend heavily on November election outcomes.

Alternatively (or in addition), retailers may attempt to challenge other network rules. Kroger and Home Depot, for example, filed separate suits against the networks in mid-June regarding routing and EMV security.

And while both Visa and Mastercard retracted their “anti-steering” clauses in 2013, the networks’ actions could be considered ‘overturned’ as part of the overall settlement, though there is no current expectation that either Visa or Mastercard will reinforce the “anti-steering” measures in the near term. If merchants do pursue rules changes, issuers may be incented to consider alternative payment methods, which may spur investment in real-time payment options.

The Court’s decision increases industry uncertainty around interchange and future rules, and has a wide range of potential spillover effects, including limiting industry investment, hampering mobile payments development, and undermining cooperation efforts between networks, merchants, and other stakeholder on issues such as fraud prevention. Though the future is unclear, the uncertainty the decision produces is likely here to stay.