As much as 15% of North American banks’ payments revenue — $88 billion — is likely to be displaced by the growth of digital payments and competition from non-banks, as payments become more instant, invisible and free, according to a new report from Accenture. Of the $88 billion, approximately $82 billion is attributable to US banks and $6 billion to Canadian banks.

Titled “5 Big Bets in Retail Payments in North America,” the report is based on a revenue-risk analysis model that Accenture developed to measure trends in how consumers pay and projected changes in merchant behaviour, technology and regulation. The research is complemented by a survey of payments executives at the 50 largest US and Canadian banks by revenue to determine how they plan to mitigate and capitalise on the disruption in payments to grow customer loyalty, revenues and profitability. 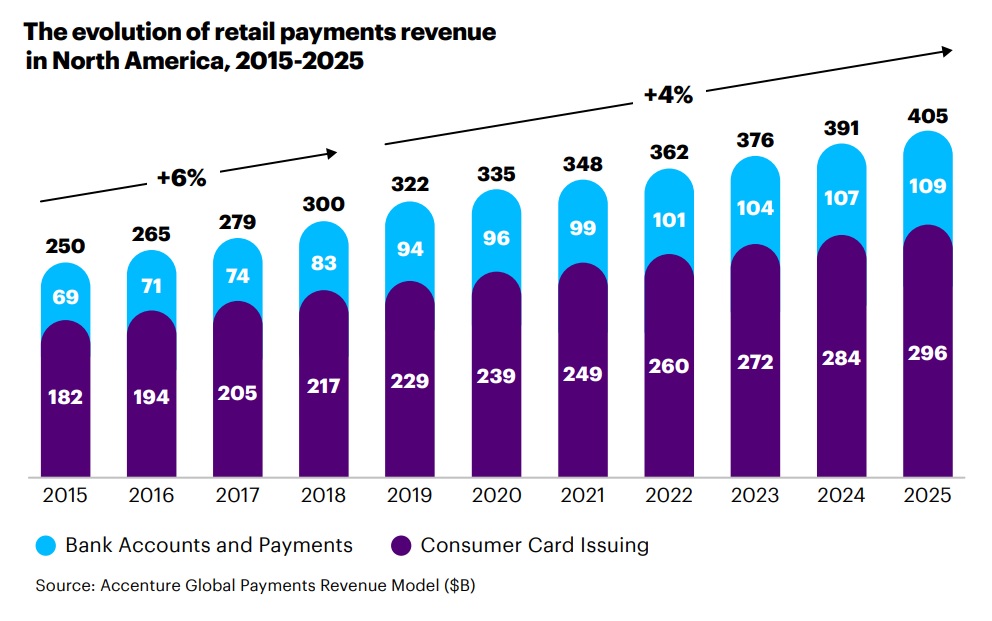 The research confirmed industry awareness of the threats posed by new players in payments. Six in 10 (60%) of the banking executives surveyed believe they will lose up to 15% of payments revenue in the next three years to non-banks, FinTechs and other competitors. When asked to identify the primary challenge to their business, nearly two out of five (38%) respondents cited competition from big technology companies, and one-third (34%) cited competition from FinTechs. Payments FinTechs in North America attracted nearly $11 billion through more than 800 deals between 2016 and 2018 alone, according to the report.

The report notes that the impact of consumer demand for rewards has squeezed payments revenue, with spending in loyalty and rewards by the top five US card issuers jumping from $11 billion in 2010 to $31 billion in 2018. Pressure on traditional revenue models, eroding fees and increased competition will force banks to invest in value-added services to drive economic performance. Bank executives cite next-generation reward schemes and embedded payments capabilities among their priorities for generating new payment revenue, according to the report.

“Payments is North America’s largest FinTech segment, and while banks continue to ponder whether FinTechs are friends or foes in retail payments, in most cases the answer is both,” continues Grieve. “Banks need to determine which FinTechs they want to beat, buy or join. Banks that don’t collaborate with FinTechs will likely fall behind in customer experience, innovation and agility.”

Hampered by legacy systems, bank executives understand that implementing digital technologies will be essential to support innovation and efficiency. One-quarter (24%) of respondents cited artificial intelligence, robotics, machine learning and innovative payments hubs as the key platform technology capabilities they need to adapt their core systems in order to shift to high-speed and continuous payment flows.