Based on proprietary and patent-pending ‘programmable tokenization’ technology, Token has created a digital 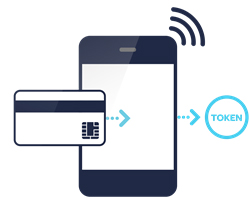 payment network designed to empower banks to market leadership in digital transactions. The Token platform leverages each bank’s policies and procedures and integrates with their core system APIs to provide an instant springboard into the execution of cryptographically secure, PSD2-compliant digital transactions.

The power of Token

Token’s platform frees banks from the ‘shared secrets’ model of transaction security where sensitive information like card numbers and usernames and passwords, or OAuth tokens, are used to authenticate users.

This practice pre-dates the digital age and remains critically vulnerable to attack, yet still underpins the overwhelming majority of banking transactions, including those ‘secured’ by third-party token service providers.

Instead, Token enables banks to control the entire transaction chain, issuing and redeeming payment authorizations in the form of pre-programmed ‘smart tokens’.

These can encapsulate any number of arbitrarily complex terms and conditions in accordance with the instructions of the account holder, including their exclusive assignment to individual transaction amounts, between specific parties, at precisely specified times.

New revenues and the end of bank disintermediation

Given that the Token solution integrates seamlessly with each bank’s infrastructure, banks no longer have to relinquish front-end control of their customer relationships to digital payment-enabling partners. Token’s platform also enables banks to issue value added services and retain ownership of the resultant customer profiling data. These advantages benefit banks by eliminating the widely documented threat of disintermediation, while providing a model that both increases margins and reduces time-to-revenue for new digital services.