Over the past month we have observed a number of important mobile wallet developments. Announcements from Wells Fargo, Visa and Apple have highlighted the growing competition among FIs, merchants and third-party service providers.

Despite these launches another major player, MCX, put its product on indefinite hold. These events place increasing pressure on issuers to expand their mobile wallet strategies beyond the integration of third-party services such as Apple Pay and Android Pay – writes Jeff Crawford, Senior Manager, and David Cencula, Senior Analyst in Payments Strategy and Innovation at First Annapolis.

On May 24th, Wells Fargo unveiled its plan to release the Wells Fargo Wallet for Android by mid-to-late 2016, making it the second-largest bank (behind Chase) to introduce a proprietary mobile wallet solution. The wallet will be embedded into its existing mobile banking app, a new development in the market that will provide an integrated banking and payments experience. The app will enable instant provisioning of cards and real-time checking account and credit card balance checks. Wells noted that future versions of the wallet will include on/off card controls, cardless ATM access and integration of credit card rewards programs.

The week following the Wells Fargo announcement, Visa publicized the rollout of its white-label wallet for FIs, the Visa Digital Commerce App. The offering will enable FIs of all sizes to offer a proprietary-branded mobile wallet to its customers. The product is in various stages of implementation at 30+ FIs. Unlike the Wells Fargo wallet, the Visa app will be separate from mobile banking. The wallet will support credit, debit and prepaid cards, and all transactions will be tokenized.

Apple recently announced that it will be expanding Apple Pay to desktop and mobile-based browser purchases. Once payment information is provisioned into Apple Pay, users will be able to select the Apple Pay logo at checkout and authenticate the transaction using TouchID on their mobile device. The feature will be restricted to Apple’s Safari web browser operating on the updated Mac OS. The service will allow Apple Pay to compete directly with PayPal, Visa Checkout and MasterPass.

Meanwhile, the Merchant Customer Exchange (MCX) informed participants in its CurrentC pilot that the program would be terminated by the end of June 2016, with no planned national launch. Once seen as a rising threat to Apple Pay, several of its merchant members (notably, Walmart) have introduced proprietary payment solutions. The termination of CurrentC does not, however, represent the end for merchant wallet offerings. On the contrary, we expect to see a proliferation of merchant wallets. In addition to Walmart Pay and the rumored Target Pay, Chick-Fil-A recently released a mobile wallet with an integrated loyalty program. 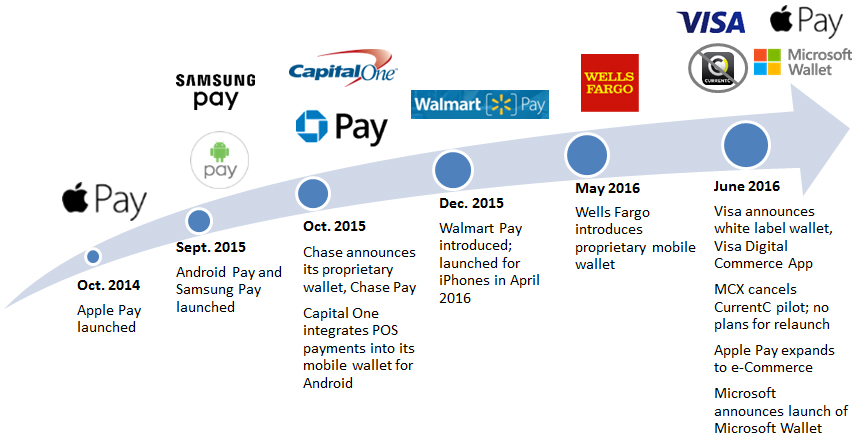