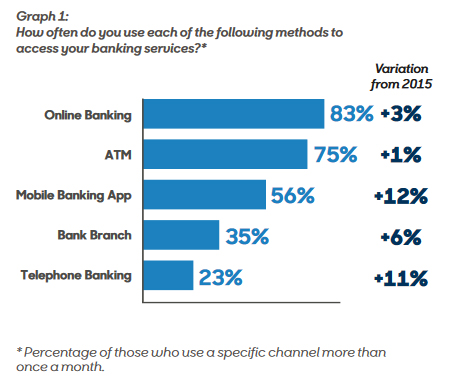 For the purposes of this study, we define a “mobile banking app” as an app that allows customers of a payment provider to conduct a number of financial transactions — viewing account balances and transactions, moving money between accounts, making payments to new and existing payees, choosing how to receive account statements, etc. — through a mobile device such as a mobile phone or tablet.
According to the consultancy firm CACI, the number of branch visits in the UK is set to decrease over the next four years as people turn to mobile banking. Surprisingly, they also predict online banking usage to drop.
While the TSYS study did not show a decline in online banking, the findings suggest that consumers are moving away from traditional banking channels such as bank branch and telephone banking. Instead, customers are seeking out self-service channels such as “Online Banking,” “ATM,” and “Mobile Banking App.”

While non-traditional channels are gaining ground with consumers, insights from the study
confirm that consumers increasingly expect consistent service across all channels. Engaging
customers with an omni-channel approach can guarantee a seamless and consistent banking experience. Furthermore, this is crucial for banks in order to optimise their strategy toward more
profitable customers.

THE YEAR OF THE MOBILE BANKING APP

When compared to the previous year’s study, consumers’ usage of “ATMs” and “Online Banking”
remained steady, while “Mobile Banking” experienced a significant increase of 9%.
In 2015, we noticed the “Marmite effect” with m-banking apps whereby people use them a
lot or not at all.
During the course of the past year, mobile banking app usage has rendered
this effect obsolete. Rather, 2016 just might be the year of the mobile banking app, reflecting
consumers’ increased understanding of the benefits offered by m-banking apps. 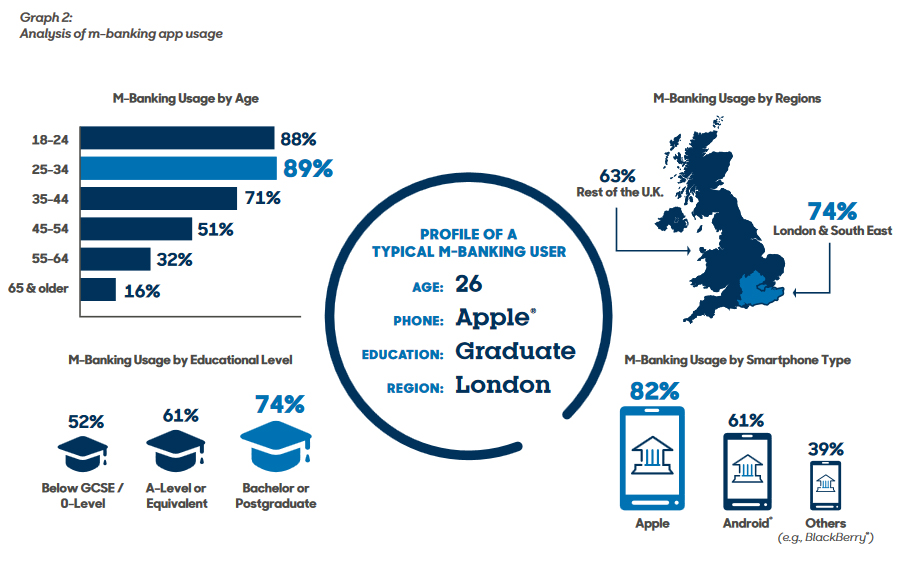 Data from our study dispels the popular belief that m-banking apps are the exclusive domain
of millennials, those often characterised as digital natives. (See Graph 2.) Across our three
segments, including Digital Immigrants — those aged A-B, the usage level of banking apps is over
50%.
71% of respondents aged 35-44 reported using an m-banking app. Only those aged 55 and older showed a usage below 50%. In comparison to last year’s study, all age groups have increased their m-banking app usage. What used to be exclusively the domain of digital natives is now embraced by a wider audience.

Among respondents who downloaded the m-banking app, we identified the most popular actions undertaken in the last six months. Consistent with 2015 findings, the top reason for using a banking app is to “Verify balance” (82%), which confirms its high popularity for more passive activities.
Surprisingly, “Transferred money between accounts” (72%) has outpaced one of the most popular actions of 2015, “Verify recent transactions” (69%), with an 8% increase over 2015.
Our findings suggest UK respondents hold increased confidence levels with conducting financial transactions via mobile devices, confirming the growing trend of mobile banking and payment management functionalities.

The popularity of activities such as “Verify balance” and “Verify recent transactions” suggests an opportunity exists to proactively engage cardholders with alerts. According to the TSYS 2016 U.K. Payment Study , cardholders value deciding when and how they receive alerts, whether that is when their balance falls below a predetermined threshold or after each card-not-present transaction. (See Graph 3.)