Half of European adults with access to a mobile device such as a smart phone or tablet computer expect to use mobile payment apps over the next 12 months, according to an international study of more than 14,000 consumers.

While one third (33%) of Europeans have already used a mobile payment app, which allows the user to make payments via mobile or tablet, this is expected to increase to half (51%) over the next 12 months.

This means as many as 185m European consumers could be moving towards a ‘cashless society’ – choosing to pay electronically rather than with physical cash.

The ING International Survey on Mobile Banking revealed that Turkish (56%) and Polish (43%) mobile device owners are leading the way when it comes to embracing mobile payment apps – a higher adoption rate than in the USA (42%). (See table 1 below).

However, the uptake of mobile payment apps is more gradual in other European countries. 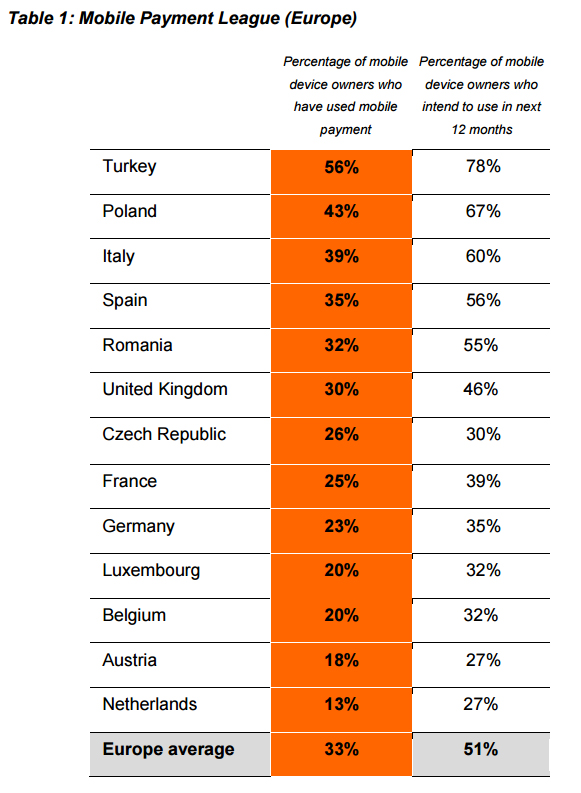 Just one in eight have made payments via smartphone or tablet in the  Netherlands (13%), while a quarter across Germany (23%) and France (25%), and 30% in the UK have done so – all of which lag behind leaders Turkey and Poland. For those yet to embrace mobile payment apps, a lack of trust is cited as the biggest barrier (42%).

These figures suggest there is still work to be done in reassuring consumers that their details are secure. Despite the introduction of Apple Pay and Google Wallet, two high profile services that allow payments to be made via smartphone, fewer than one in 10 (9%) of respondents have used these or other ‘named groups’ to date.

Additionally, users are far more likely to consider using the app associated with their bank for mobile payments (59%) than ‘named groups’ such as Apple or Google (39%). More people are using alternatives to physical cash to make purchases with half (50%) of Europeans saying they use physical cash much less than they did 12 months ago. This trend looks set to continue, with 84% of those respondents saying they intend to use even less cash in the next twelve months.

The research also suggests the move to mobile money management comes with added benefits. Nearly half (48%) of respondents claim to feel more in control of their finances, while one in five (20%) pay their bills on time more often and a similar number have never missed a payment (21%) since using mobile banking.

ING Senior Economist Ian Bright commented: “The global market for mobile payments is reported to be growing rapidly and what we’re seeing is a major shift in consumer attitudes and behaviour to support that growth – though not everyone is convinced about moving to a cashless society just yet.

“While physical cash still has its place in society, mobile payment apps are giving consumers greater freedom when it comes to managing their finances. The instant visibility offered by mobile banking also means more consumers feel in control of their finances, claiming to have avoided missing payments and keeping on top of bills.”