After Apple has begun trying out carrier billing, a way of using your phone bill to make purchases. Apple users in Germany and Russia can make purchases through their phone bill on their iTunes account. The tech giant is using those two countries as a testing ground for possibly rolling out to the rest of the world, according to one source close to the deal.

Now, Microsoft is jumping onboard too. Microsoft will be integrating carrier billing into its Windows Store. 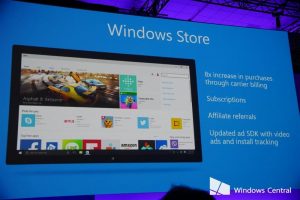 Windows 10 users can make purchases on any device running Windows 10 by just putting in their phone number. The Windows Store sells apps, music, movies and games. Microsoft first announced that it would incorporate carrier billing schemes across Windows 10 devices at its developers conference in April, but this is the first actual roll out.

This will be first available in the United States through the Sprint network, but will be rolling out to other carriers and countries soon. Switzerland is next on the roll out list, said Boku, a company that specializes in carrier billing integrations that Microsoft is working with.

Carrier billing is popular in developing countries, where banking infrastructure can be limited, making it difficult to obtain a card. The potential appeal for carrier billing in more developed countries, however, is the ease of paying with just a phone number. Instead of having to input long credit card numbers and security codes, the user can just plug in their phone number, authenticate and make a purchase.

“The Windows Store is designed to be a one-stop shopping experience for free and paid digital content. We believe offering carrier billing is important to giving consumers a convenient payment method and driving developer monetization,” said Todd Brix, general manger of the Windows Store, in a statement.

In previous implementations of carrier billing on its Windows Phone, Microsoft said it led to a purchase rate increase of 8 times in emerging markets and 3 times in developed markets. But since Windows is nearly nonexistent on phones these days, it’s still not certain how useful carrier billing will be outside of phones on tablets and PCs.

Besides Apple, Google and Sony are the other two big tech players who have begun incorporating carrier billing into their stores.