The global payment cards market has grown to 14 billion cards, with UnionPay consolidating its position as the largest scheme – A billion new cards issued in just one year.

New research reveals that the number of payment cards worldwide increased by 8% in 2016 to 14 billion. With a billion new cards issued in the space of a year, the global market remains buoyant. The fastest growth is in Asia-Pacific, driven by financial inclusion initiatives, with China contributing by far the most to the rise in card numbers.

By 2022, the number of cards worldwide is forecast to rise to 17 billion as many people, particularly in parts of Asia-Pacific and the Middle East and Africa, still do not hold a payment card.

UnionPay, Visa and Mastercard account for 80% of all cards

According to Global Payment Cards Data and Forecasts to 2022 study, the continued rapid expansion of the Chinese cards market has helped UnionPay to increase its share of cards to 43% in 2016, and extend its lead over Visa and Mastercard. UnionPay has been the largest scheme globally for card numbers since 2010 and, by the end of 2016, there were more than six billion UnionPay-branded cards in circulation.

UnionPay, Visa and Mastercard collectively account for 80% of cards worldwide. The remainder are T&E schemes (American Express, Diners Club and JCB), Discover and domestic-only bank and private label cards. There are significant country-level differences, however; for example, JCB holds a strong position in its home market of Japan. 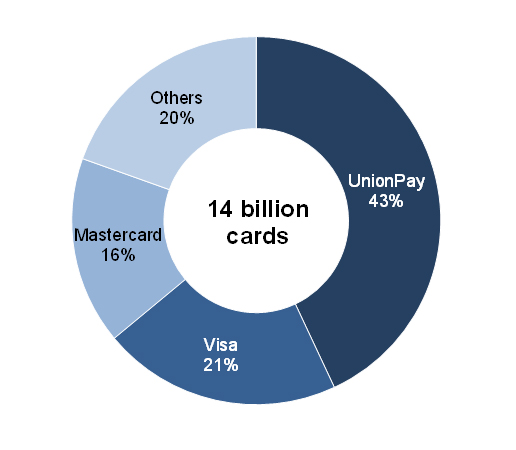 UnionPay remains a predominantly domestic scheme. Less than 1% of its cards are issued outside China, mainly in other Asia-Pacific countries, but also in Europe. It continues to expand to new markets and the adoption of its chip standards in six Asia-Pacific countries points to the scheme’s plans to step up its international expansion.

UnionPay will eventually face greater competition in China, with Visa and Mastercard continuing to await clarification from the Chinese regulator before submitting their applications to operate domestically in the country.