A new report from payment consultancy Aite Group states that despite Japan being viewed as one of the most advanced payments nations in the world, it remains a cash-intensive society. 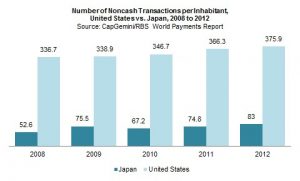 Japan has had mobile payments since 2004, with thousands of contactless POS terminals deployed in its transit systems, and terminals gracing nearly 50,000 retail locations across the country.

Based on Aite Group interviews of and discussions with more than 50 bankers, consultants, and retailers in Japan, Aite’s new report, “Japan: A Payments Paradox”, explores the Japanese payments infrastructure and compares it with the US payment system and global payment initiatives. It also describes the challenges that Japan faces in integrating its sophisticated, yet isolated, payment system with the rest of the world.

“Japan will not evolve the same way as other developed markets. Its cash-based economy poses challenges for card networks attempting to penetrate the market as well as for bankers working to expand the Japanese economy globally,” says Thad Peterson, Aite Group retail banking and payments senior analyst and author of the report. “Any organisation thinking of entering the Japanese market needs to understand the difference between Japanese payment behaviour and behaviour in other markets, optimally well before the Tokyo-bound 2020 Summer Olympics.”