The world’s largest technology companies are piling in, seeking to replicate in India the e-commerce dominance they enjoy in their home markets. The contest will soon pit American tech groups against rivals from Asia, and China in particular. Who will win?

The attractions of India for both sides are obvious. The local market is potentially enormous but still technologically under-developed. About 130m Indians owned smartphones last year, a number that is set to hit 750m by 2020, according to Ericsson. The prospect of such rapid growth has prompted a record funding rush from global venture capital groupsover the past year. It gives the southern IT hub of Bangalore a vibrant boomtown feel – according to an article in the FT.

India is especially attractive to the likes of US powerhouses Google, Facebook and Twitter, as they seek to expand into Asia. All three companies face severe operating restrictions in mainland China, which would otherwise be an obvious growth market. Those American players that are allowed to set up shop in Beijing or Shanghai still face stiff competition from local incumbents. India, by contrast, is relatively open territory.

The Americans have a head start, too. India is already Facebook’s second-largest market 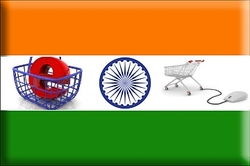 by users and Twitter’s third largest, They are boosted by local consumers who warm to well-established western technology brands. In a few years Indians will become the largest market for both companies, even though the country’s minuscule online advertising market means neither has much chance of turning a quick profit. Amazon is also expanding aggressively, having decided to throw $2bn into India last year, as it takes on top-ranked domestic online retailer Flipkart. A similarly fierce contest faces Uber as it grapples with local taxi-hailing app Ola Cab, and its Japanese backer SoftBank, which has pledged to plough $10bn into Indian internet businesses over the next decade.

The Chinese contingent is arriving later but its intent is no less formidable. Alibaba’s plans are most advanced, having made a debut $500m investment this year into PayTM, a mobile payment platform that also happens to run an online marketplace. The move could place China’s largest ecommerce company on a collision course with Amazon. Jack Ma, Alibaba’s founder, is now scouting for further deals.

All these companies have huge financial resources, allowing them to begin to reshape sizeable sections of India’s nascent internet economy. But they have another advantage, too — business models that are likely to prove more adaptable to India’s low-end internet market than those of their main US rivals.

As in China, India’s internet market will be dominated by mobile phone users, rather than computers. Indian consumers are also highly price-sensitive: about a third of Indian smartphone owners still have no active data connection for fear of running up excessive charges, according to research by Convergence Catalyst.

Critics often say that India’s start-up scene is marked out by unimaginative operators that replicate western models, from online retail to classifieds. But straight US transplants, such as ecommerce groups eBay and Groupon and online travel agents Expedia, have fared badly.

“In India, clone businesses tend not to work well,” argues Shailendra Singh, India managing director for US-based venture group Sequoia. “What India needs are mutants, meaning businesses with the same underlying DNA as those that have worked elsewhere but which come with extra powers and abilities, or entirely new species suited to local conditions.”

That does not mean Chinese companies will find India easy. Xiaomi has posted respectable smartphone sales but nothing close to its spectacular growth at home. But businesses honed in other emerging economies should be better able to adapt to India’s market conditions. In this battle, China’s tech invaders may well have an edge.