Since India’s demonetisation policy took place, digital payments spiked in the immediate aftermath. However, post adoption of the policy the pace of adoption has been much slower than anticipated. Digital transactions inched forward in the past year with the exception of Unified Payments Interface (UPI), country’s flagship payments platform. 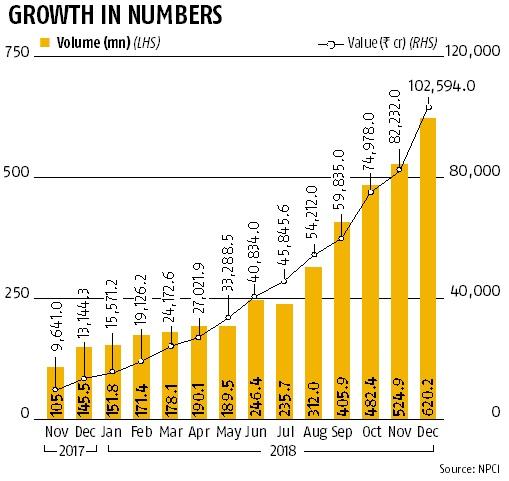 UPI crossed the Rs1 trillion ($14 billion) milestone for monthly value in December, growing nearly eight times over the previous year. It also achieved a monthly volume of over 600 million, four times the volume of UPI transactions in December 2017, according to data released by National Payments Corporation of India (NPCI).

The total payments industry saw a rise of 27% in volume and a fall of 1% in November 2018 over November 2017, according to data released by the Reserve Bank of India. The forms of payment include cards, mobile wallets and mobile banking.

UPI is a fairly new player in the payments space with a little over two year since its introduction. It was launched in August 2016 with 21 partner banks and saw a monthly transaction volume less than a lakh and value of Rs 3 crore respectively. The platform has seen strong growth ever since then.

NPCI attributes UPI’s success to three main features – simple, seamless and secure, which deliver to the needs of the consumer, merchants, banks and FinTech players.

“UPI was a game-changer in the true sense with complete interoperability being driven on the front end using a mobile phone , with reduced friction while on-boarding and secured two-factor authentication,” said an NPCI spokesperson.

UPI has already overtaken wallets in terms of volume and UPI has nearly twice the monthly volume than other e-wallets in the market. UPI is expected to see a major boost in both volume and value of transactions with the introduction of new features in the form of UPI 2.0.