It has long been predicted that Amazon would eventually make a move into banking. In March, Payments Cards and Mobile reported that the online retailer was in talks with J.P. Morgan to offer current accounts for Amazon Bank. Of course, to launch Amazon Bank it would have to overcome hurdles that have slowed other retailers in the past. It would have to clear regulatory obstacles, perhaps by buying a smaller bank and scaling it up. 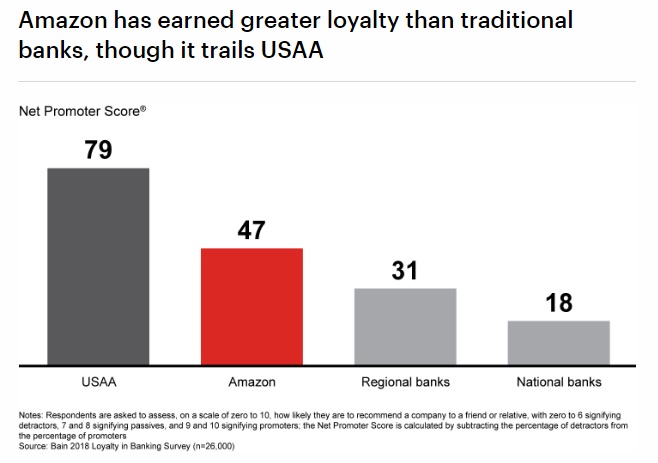 systemic risks and conflicts of interest to lobbying from existing market players. For example, Walmart made an ill-fated stab at the banking sector in 2005, until some unlikely bedfellows in the financial industry fended it off.

But some think nothing can stop Amazon. Not even banking regulators or geographic borders can slow them down. With patents, patience, a willingness to fail, a huge and devoted customer base, a universe of data, and plenty of money, Amazon represents a real threat to the traditional banking industry.

Would your financial institution ever send a service representative to a someone’s house or office to take a deposit? Not likely. But Amazon does. “Deposits?” you may think. “Did I miss something?” Maybe not in the US or Europe  – Yet.

In India, Amazon delivery staff already take cash deposits at people’s doorsteps. Amazon collects deposits from Indian customers through the Cashload feature in a version of Amazon Pay. Many Indian customers prefer to pay for deliveries in cash, on arrival. Amazon allows them to warehouse any surplus cash from their purchase in their Amazon Pay account. They can also deposit additional funds against future order.

The balances can also be used to pay other bills through partner websites and apps, such as utilities and online charges, and for Amazon services, such as Prime Membership. The accounts also hold gift card balances and credits for returns. Spending and balance tracking are included.

Up to 10,000 rupees ($143 by current exchange rates) can be deposited monthly — a significant amount in a country where the average monthly income hovers around $50.

Besides the Cashload feature, Amazon also permits deposits from credit cards, debit cards, and banking accounts. So could this type of service along side traditional current account be launched in the US and Europe? Quite possibly. When it comes to Amazon, nothing can be ruled out.

Amazon already makes possible many of the smaller tasks associated with banking, from paying back friends to storing cash, through unlicensed transactions, such as Amazon Gift Cards or the Amazon Cash service. If you’re a small business owner, you can take out a loan from Amazon, which has already loaned over $3 billion to entrepreneurs.

And more such services may be on the way, so at what point do executives in the traditional financial industry concede that Amazon is, in fact, a bank?

In the end, Amazon’s close relationship with its customers may be more dangerous to banks than its size. In a briefing earlier this year, Bain warned that, “perhaps the greatest challenge to senior bank executives and board members is to recognise that Amazon has a completely different worldview focused on lifetime customer value, while most banks remain slaves to in-period ‘bad’ profits.”