Global Payment Cards Data and Forecasts shows that the Middle East and Africa (MEA) and Asia-Pacific were the fastest growing regions for payment cards in 2015, with card numbers up by 13% and 10% respectively.

Underlying this double-digit growth are financial inclusion measures, such as digitalisation of salary and government benefit payments, which have yielded positive results.

Forecasts show that the number of cards worldwide will rise 28% from 13 billion at the end of 2015 to 17 billion by the end of 2021. With projected growth rates of 49% and 35% over this period, MEA and Asia-Pacific will continue to be the fastest expanding regions.

“Although the growth rate in the number of cards worldwide is slowing down, there are several large markets which still have considerable potential,” explains Chris Herbert, RBR Senior Associate.

“For example, there are comparatively low levels of bank account and card holding in India, Indonesia, Nigeria and Pakistan, and therefore huge numbers of possible new clients who have not yet entered the banking system.”

Debit cards will contribute the majority of growth 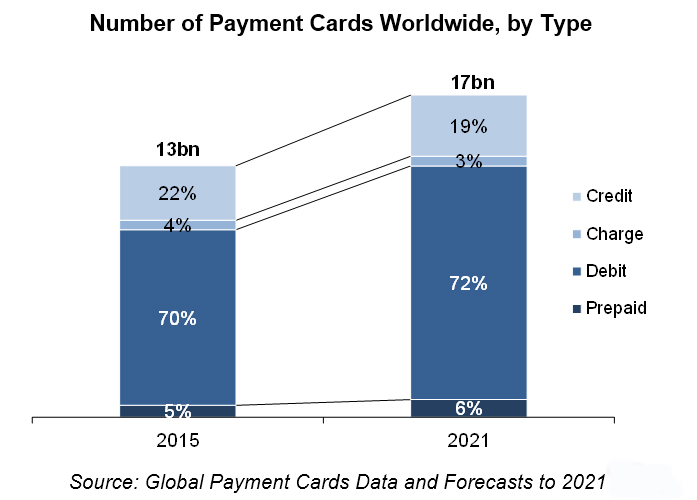 Debit cards make up 70% of payment cards globally, up from 68% in 2014. As unbanked individuals in emerging markets continue to enter the banking system, it is in the debit sector that we will see most growth, as it is debit cards that are normally issued when a person opens a current account. By 2021, debit cards are forecast to represent 72% of all payment cards.

The interchange fee regulation enforced across the EU in December 2015 typically lowered interchange for credit cards more than for debit cards, and this has impacted issuance of credit cards in many countries there.

In the Netherlands, for example, credit card interchange was a major source of revenue for banks, but some now appear to be discouraging customers from taking out credit cards because the caps have reduced their profitability.

In countries such as Russia, the fall in the number of credit cards is directly related to economic uncertainty as banks often respond by tightening eligibility requirements and increasing interest rates in such circumstances.