Google has launched a mobile payments app dubbed Tez in India, saying it will work on both Android and Apple smartphones. 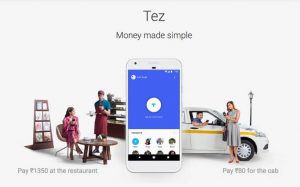 Tez allows users to make money transfers to each other and to buy goods from physical stores and mobile websites.

It is based on the country’s Unified Payment Interface (UPI) standard – a government-backed system launched last year to encourage digital payments.

But it will have to compete with PayTM, a popular local mobile wallet system. PayTM – which is part-owned by Japan’s Softbank and China’s Alibaba – already has more than 200 million registered users in the country.

However, the rival systems work on a different basis. Tez – which is Hindi for fast – transfers money from a user’s bank account directly to the recipient and thus acts as a replacement for a bank card, in a similar manner to Android Pay or Apple Pay.

By contrast, PayTM – which is an acronym for pay through mobile – involves first placing money into an “electronic wallet” before being able to use it to make cash-free payments. It launched in 2010 and has the benefit of already being widely adopted with several merchants offering discounts and cashback offers.

Google says that Tez works with all 55 banks that are already participating in UPI, including many of India’s largest lenders. However, the Tech in Asia blog noted that the majority of India’s 150 eligible banks have yet to adopt UPI.

Google provides the services without charge. It has been speculated that it might introduce additional profit-making functions at a later stage. The US firm said Tez would soon be pre-installed on new handsets from Lava, Micromax, Nokia, and Panasonic.

To spur on its adoption, Google has also included an in-app “scratch card” offer, in which users can win a prize every time they make a purchase costing more than 50 rupees (78 cents; 57p).

The search giant is hoping that the public come to see Tez as being more convenient than PayTM and other similar wallet-based systems.

“It doesn’t cost you anything to use Tez, and your money stays in your bank so you continue to earn interest,” Google stated in its India blog.

“And best of all, because Tez works directly with your bank account, there’s no need to top up a wallet balance or pay fees to get money out.”

The country’s Economic Times newspaper reported that the app would soon have competition from Facebook’s WhatsApp, which is working on an update that will add UPI-based services and already has more than 200 million active users in India.

Early adopters have also faced a slow service when trying to use Tez, which Google has blamed on “higher than expected traffic”.