Google has been awarded  a patent for aerial drone delivery by The United States Patent and Trademark Office (USPTO), concept, postandparcel.info. 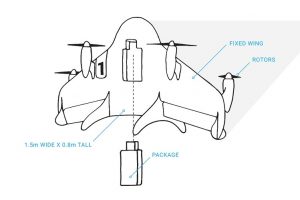 communication module”. It would generate an “avoidance cue” to warn bystanders that it is lowering an item to the ground; and it could “also be further configured to generate the retrieval cue”.

The application for the patent was filed in July 2014 and USPTO granted the patent and published it on its website on 26 April 2016. The USPTO has granted Google a number of other drone-related patents and also recently awarded a patent for a self-driving parcel delivery vehicle.

There are already a number of delivery drones which have actually run tests using tethers to raise and lower payloads, the same source indicates.