In the first quarter of 2015, global smartphone unit demand increased +7%, compared to the same period last year. Sales reached 310m units, with growth down from +19% year-on-year in Q4 2014. This slowdown was caused by a year-on-year decline in demand for smartphones in China and Developed Asia, down -14% and -5%, respectively.

Smartphone sales value in Western Europe declined on a year-on-year basis for the first time in Q1 2015, dragged down by Spain and France. As smartphone penetration nears saturation point, both countries are expected to see a slowdown in smartphone unit growth this year compared to 2014. 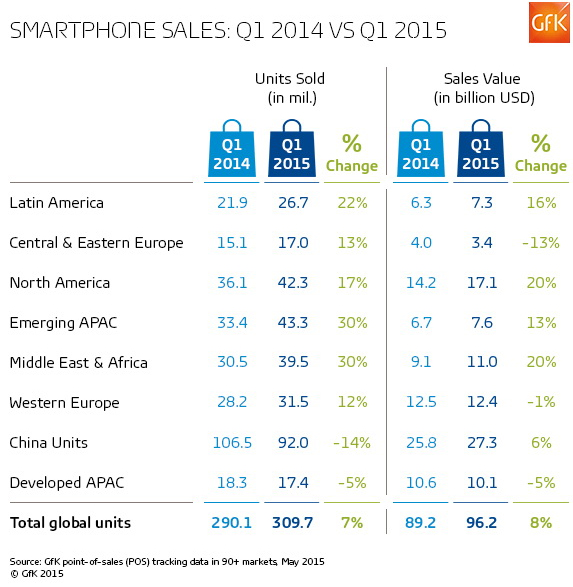 In Central Europe, the macroeconomic situation in Russia has significantly impacted sales. As a result, GfK forecasts that 2015 smartphone demand in the region will grow more slowly than Western Europe for the first time since 2010.

Kevin Walsh, director of trends and forecasting at GfK comments, “The weakness in China was caused by a significant slowdown in 3G demand, which was not offset by 4G growth. We forecast China to return to growth in the second half of the year, driven by a continued 4G ramp-up. In Developed Asia, the year-on-year decline was caused by tough comparisons with Q1 2014, when demand was pulled forward in Japan due to an upcoming VAT increase in April. We forecast unit demand in Developed Asia to grow by +3% year-on-year in 2015, driven by Japan and South Korea, which are expected to return to growth in 2Q15.” 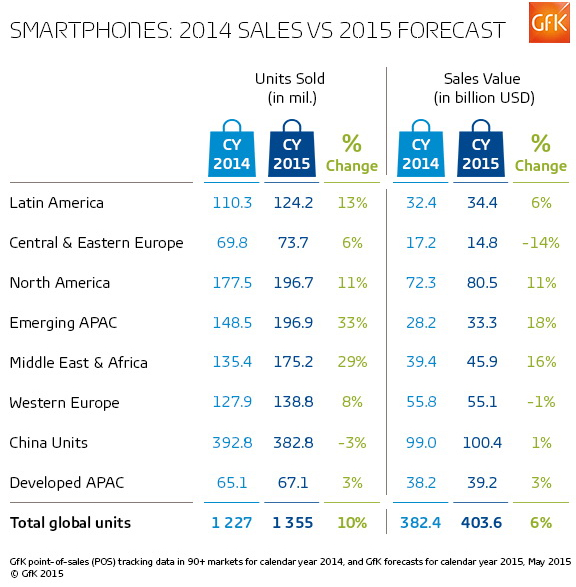 The 4G ramp-up
In Q1 2015, 4G unit share surpassed 50% of global smartphone demand for the first time. China saw the greatest 4G share increase in the quarter – up 16% percentage points to 73%, from 57% last quarter. Growth has been buoyed by the continued price erosion of 4G smartphones. GfK forecasts global 4G share to increase further in 2015, reaching 59% in Q4 2015.

Smartphone growth in India and Indonesia is also expected to be helped by an expanding 4G network. In Q1 2015, 4G share in both countries was well below the global average, at 4% and 7%, respectively. GfK forecasts 4G unit share within smartphones to reach 7% in India and 10% in Indonesia in 2015.

Supersize smartphone screens
Q1 2015 saw a continued shift towards larger screen sizes (5”+), where sales of 166m units equated to 47% of the global smartphone market, up from 32% in Q1 2014. Share of large screen devices in N. America hit 70% in the quarter, up from 59% in the same period last year, driven by strong demand for high-end models. By comparison, in China, where the trend is particularly pronounced, the growth in share to 57% – from 32% in Q1 2014 – was driven by cheaper large screen models flooding into the market. GfK forecasts this screen size migration to continue in 2015, with global demand for large screen devices increasing by +30% year-on-year to account for 69% of total smartphone unit demand this year.

The outlook for 2015
Walsh continues: “GfK forecasts global smartphone unit demand to grow +10% year-on-year in 2015, a slowdown from the +23% growth experienced last year. Emerging Asia is forecast to be the fastest growing region, driven by India and Indonesia, where low smartphone penetration leaves plenty of room for growth.”