According to a new mobile phone forecast from the International Data Corporation (IDC) Worldwide Quarterly Mobile Phone Tracker, smartphone shipments are expected to grow 11.3% in 2015, which is down from 27.6% in 2014.

This is on par with IDC’s previous smartphone forecast of 11.8% growth in 2015. While overall smartphone growth will continue to slow, many markets will experience robust growth in 2015 and beyond, and worldwide shipment volumes are forecast to reach 1.9 billion units annually by 2019. 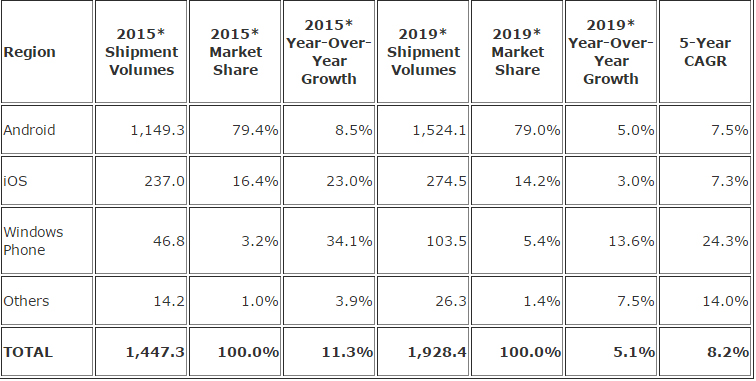 IDC expects 2015 to bring two notable milestones. First, IDC projects this to be the first year in which China’s smartphone growth, forecast to be 2.5% in 2015, will be slower than the worldwide market. Second, and somewhat related to the China forecast, Android smartphone growth is also expected to be slower than the worldwide market at 8.5% in 2015. IDC believes both trends will persist throughout the forecast period, which now goes to 2019.

“Smartphone volume still has a lot of opportunity in the years to come, but two fundamental segments driving recent years’ growth are starting to slow,” said Ryan Reith, Program Director with IDC’s Worldwide Quarterly Mobile Phone Tracker. “As reported earlier in May, smartphone shipments in China actually declined year over year in the first quarter of 2015, showing that the largest market in the world has reached a level of maturity where rapid growth will be harder to achieve. This has implications for Android because China has been a critical market for Android smartphone shipments in recent years, accounting for 36% of total volume in 2014. As Chinese OEMs shift their focus from the domestic market to the next high-growth markets, they will face a number of challenges, including competition from ‘local’ brands.”

Apple faced a similar situation in 2012-2014, when its year-over-year growth rates were slightly below the worldwide market. But its recent shift in product line to bigger screen models with a broader country reach has had an immediate impact on volumes. IDC expects iOS smartphones to grow 23.0% in 2015 and remain above worldwide market growth rates throughout the forecast.

“There’s no question that a large chunk of Apple’s installed base is still using older models (pre-iPhone 6/6+), which leaves continued growth opportunity in the second half of 2015 and beyond,” noted Reith. “In addition, IDC believes a sizable portion of the Android installed base were those who migrated over to the platform from iOS with the desire for a larger screen smartphone. This is an opportunity Apple is no question focusing on. However, the price difference between Android/iOS devices in many markets will remain a significant hurdle for Apple.”