US transactions processor Global Payments is rumoured to be in talks to buy smaller rival Heartland Payment Systems, according to people with knowledge of the matter. Shares in both companies rose.

A deal could be announced as soon as this month, the people said, asking not to be identified because the 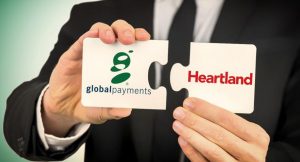 details aren’t public. No final decision has been made, and talks may still fall apart, they said. Heartland rose as much as 22% in New York. It has a market value of more than $3 billion. Global Payments climbed as much as 7.2% – according to Bloomberg.

Representatives for Heartland, based in Princeton, New Jersey, and Atlanta-based Global Payments declined to comment.

Card-processing companies have been rushing to consolidate as they seek to tap into growth sparked by a rising number of retailers offering online and mobile shopping. Atos SE, a French computer-services provider, is considering making an offer for Atlanta-based EVO Payments International, while Worldpay Group Plc was the subject of offers from peers Ingenico Group SA and Wirecard AG before being listed by its private equity backers in October.

Global Payments and Heartland are two of the US’s largest so-called merchant acquirers, industry jargon for companies that provide technology for helping businesses and government entities process credit and debit transactions. Global Payments had about 2.9% of the global transactions processing market in 2014, while Heartland had about 2.1%, according to The Nilson Report, an industry trade publication and data service.

Buying Heartland would enable Global Payments – which also operates in Canada, Europe and elsewhere – to boost its presence in the US, while getting access to new customers in the restaurant and retailing industries, said David Ritter, an analyst with Bloomberg Intelligence who covers the payments sector.

It would also further Global Payments’ strategy of moving away from relying on third parties to sign up new customers, which is less profitable than directly collecting new clients on its own, he said.

“Heartland has a very large, commissioned sales force,” he said.

Global Payments went public in 2001 and has completed at least 20 acquisitions valued at almost $2.8 billion in the past 15 years, according to data compiled by Bloomberg. Heartland would be its largest takeover yet, the data show.

The company is interested in buying businesses that can either deliver new technology, extend its reach into new geographic markets or shore up its position in places where it already operates, Cameron Bready, its chief financial officer, said during an investor conference this month in New York hosted by Credit Suisse Group AG.

“I think we’re happy with the US business we have,” Bready said, according to a transcript of the event compiled by Bloomberg. “Certainly increasing our distribution in the US, adding new niche verticals and technologies that are attractive to us, I think, are very much focus areas.”

Heartland, which processed its first card transaction in 1997, now provides payment services to more than 250,000 business locations in the US, and is the sixth-largest processor in the country by transaction volume, according to its website.