16.5 billion e-commerce card payments worth $2.1 trillion were made worldwide in 2014 according to a recent study . Increased penetration of smartphones and tablets, as well as a rising number of online merchants, is leading to greater use of the e-commerce channel.

Global Payment Cards Data and Forecasts to 2020 reveals that the payment cards sector is benefiting from this development, and e-commerce now represents 11% of the $20 trillion spent on payment cards worldwide, a share which is forecast to increase to 13% of the total $38 trillion card spend projected in 2020.

RBR reports that the value of e-commerce card payments is increasing rapidly – it rose by 28% in 2014 compared to 15% for card payments overall – and is set to more than double by 2020 to reach $5.0 trillion. 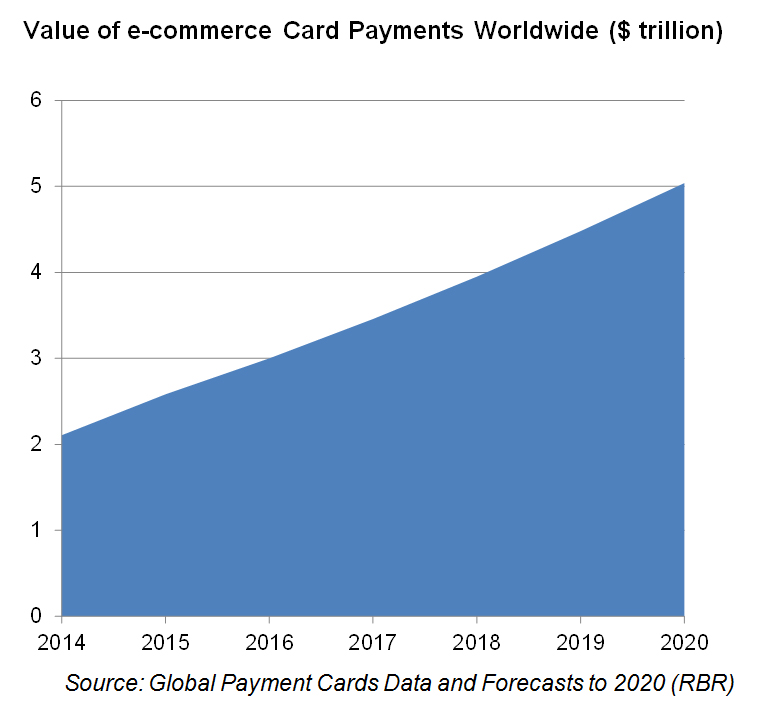 Cards are not the only way to pay online and alternative forms of payment, including PayPal, cash on delivery and transfer-based methods compete on cost, convenience and security. In several countries in central and eastern Europe, a significant proportion of online shoppers prefer to pay by cash on delivery to enable them to inspect the quality of the goods they are purchasing before making payment.

According to RBR there continue to be security concerns associated with using cards online in certain countries, such as Nigeria, where there is the perception that e-commerce payments are easy targets for fraudsters. Greater implementation of 3D-Secure protocols should persuade consumers that they can make such payments securely.

Asia-Pacific accounts for 33% of the volume and 55% of the value of global e-commerce card payments. No other world region records more than 30% of the total e-commerce card spend. RBR found the channel to be well used in China, where e-commerce makes up 15% of the value of all card payments. Traditional merchants are increasingly setting up websites in China, and the country also boasts homegrown e-commerce giant Alibaba, which had 350 million active users as of March 2015.

It is increasingly common to order goods online rather than to purchase them at physical outlets, especially with the added convenience of smartphones and tablets which allow easy internet access on the move.

As the pace of everyday life accelerates, making the ability to reduce visits to brick-and-mortar shops a welcome development for many people, the impact of e-commerce will become even greater in the coming years. This will translate into e-commerce card payments accounting for a higher proportion of the value of all card payments – RBR predicts this will reach 13% by 2020.