Global online retail is increasing rapidly with a forecasted growth rate of 17% in 2017. Asia now ‘owns’ 50% of the global B2C e-commerce market. This is one of the many interesting findings of the Global Ecommerce Report 2017. 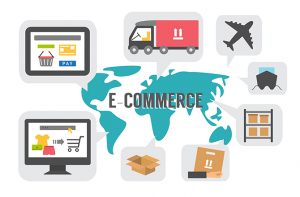 The report reveals e-commerce trends, facts and figures, and offers insights into each region of the global e-commerce industry.

Global B2C e-commerce is expected to increase to $1.84 trillion in 2017, and Asia Pacific will have the highest share of the total B2C e-commerce turnover; i.e. 50% of overall turnover. As a matter of fact, China continues to have the largest B2C e-commerce market with more than $681 billion in turnover, followed by the US with $438 billion and the UK with $196 billion.

Moreover, Australia and Turkey show the largest e-commerce turnover growth rates with 40% and 31% respectively. Additionally, the average estimated e-commerce growth of all regions is 17%.

Sara Lone, Research Coordinator at the Ecommerce Foundation, comments: “The data shows that we are far from a growth plateau in the global B2C e-commerce market. The rate of growth continues to increase, possibly due in large part to healthier economies, improvements to infrastructure and higher rates of cultural acceptance for e-commerce.

As we evolve into a more connected world, with substantially more people accessing the internet, we see new opportunities to create online shoppers, as well as increase the amount of goods/services online shoppers currently purchase.”

The report displays a correlation between social media and e-commerce trends. Over 53% of global consumers state that social media affects their online purchasing habits, and over 34% share their mobile purchase and online experiences via social media.

The report also reveals that the internet penetration of the selected report countries is currently at 66.4%, which has increased of 2.65% more compared to 2016, and is growing annually at a rate of 4%. Of all payment methods, bank cards are used most frequently, with 54% of global consumers having used them in 2016. Moreover, more than 61% of global consumers believe shopping online saves money, and price is consistently the most important factor when deciding where to shop.

One of the main challenges to global B2C e-commerce surrounds trust; over 42% of consumers cite ‘trust’ as the main barrier to purchasing online. Therefore, it is crucial for success in the global e-commerce market to create an atmosphere of trust for consumers, particularly cross-border e-shoppers.

The post Global B2C e-commerce market forecasted to grow at rate of 17% in 2017 appeared first on Payments Cards & Mobile.