Fintech investments continued at a remarkable pace last year, nearly tripling in the US in 2014, according to a new report by Accenture and the Partnership Fund for New York City. 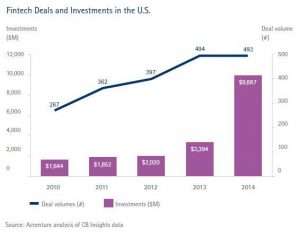 According to the report, global fintech investment tripled in 2014, to $12.2 billion, from $4.05 billion in 2013. By comparison, the overall market for venture-capital investing increased only 63% during that period.

“This past year marked a paradigm shift in how financial services companies approach and embrace fintech innovation, as they recognize the vast potential that this strong network provides,” said Robert Gach, managing director of Accenture Strategy Capital Markets. “An increasing number of banks and insurers are investing in connecting into the fintech ecosystem, whether through accelerator or incubator labs, venture investments or in other ways. We believe this explosive growth in fintech will help drive innovation within some of the world’s largest financial institutions.”

Where the Money is Going

The report notes that hot areas for fintech investment in 2014 included payments, lending, 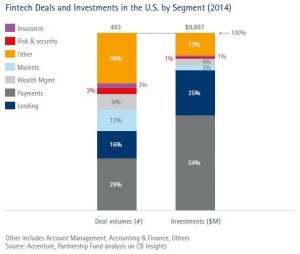 The report also highlights that New York is attracting more venture investments into wealth management and markets (which includes trading platforms) segments on a percentage basis than the rest of the US. More than four of every 10 (42%) fintech deals in New York in 2014 were in one of the segments highlighted above. These same fintech segments, however, represented just 21% of deal volume in the US.

Maria Gotsch, President and CEO of the Partnership Fund for New York City and co-author of the report, said, “For fintech entrepreneurs, New York provides key advantages that no other city can match – notably close access to potential customers, and a deep talent pool of individuals with an intricate understanding of the financial services industry. With each passing year, New York City’s fintech industry becomes more established and a larger force in the city’s entrepreneurial and financial services ecosystem.”

A key driver of the increase in investment in fintech is coming from the needs within financial services for innovation. Financial services firms are looking for new technology that can help them cut costs, comply with changing regulations, and, importantly, allow them to compete more effectively with new competitors.

Emerging technologies are providing companies with the tools to meet these challenges, for instance with cloud technology. Banks will likely consider increasing their investment in this area; particularly as they continue to work with regulators to identify which data can be hosted in the public cloud and as they look to transform their data centers with private clouds.

The report also notes that strong growth is expected over the next 18 months in blockchain, the underlying distributed-ledger technology that currently supports bitcoin. As a stand-alone technology, blockchain has the potential to help banks, credit card companies and clearinghouses collaborate to create safer, faster accounting and optimize use of capital by reducing counterparty risk and transaction latency. Investment in cyber security is also likely to increase significantly in the coming year, especially in light of broad media attention surrounding recent large-scale data breaches.

Facing digital disruption, the report highlights examples of innovative startup companies working with insurers to help transform their operations. According to the report, U.S. insurers lose $5.8 billion annually as a result of consumers switching carriers. To address a challenging customer base, insurers have started to tap the innovations within the fintech community. The report notes that more than four in 10 insurers (43%) are either planning to buy, or already have bought, a fintech startup.

In its fifth year, the New York FinTech Innovation Lab, co-founded by Accenture and the Partnership Fund for New York City, continues to help early- and growth-stage fintech companies accelerate product and business development by bringing together entrepreneurs and top bank and venture capital executives. The FinTech Lab has paired 31 startup businesses with mentors, giving them a fast track to access bank customers and win business. So far, the FinTech Lab’s 24 alumni companies have raised a total of $176 million in financing after participating in the program. InkTank, an alum from 2013, was acquired in May 2014 for $175 million.