Fintech and the evolving landscape

Global investment in FinTech ventures in the first quarter of 2016 reached $5.3 billion, a 67% increase over the same period last year, and the percentage of investments going to FinTech companies in Europe and Asia-Pacific nearly doubled to 62%.

These are among the findings of a new report by Accenture analyzing global FinTech trends.

“The drive for FinTech innovation is spreading well beyond traditional tech hubs,” said Richard Lumb, Accenture’s group chief executive – Financial Services. “New frontiers like robotics, blockchain and the Internet of Things are bound less by geography than by the industry’s ability to adopt and scale clever ideas that improve service and efficiencies. 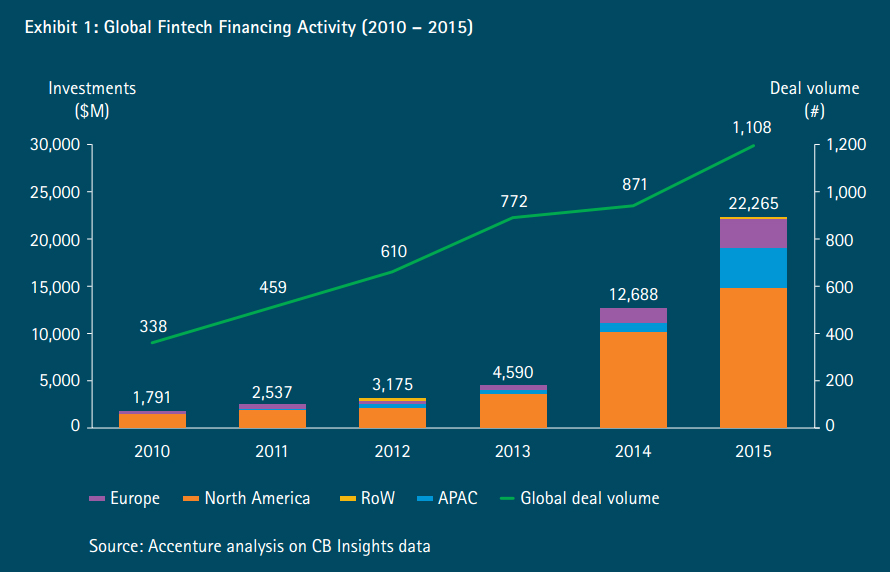 The so-called ‘Fourth Industrial Revolution’ is a global phenomenon that brings new innovation and digital companies that compete and collaborate with traditional financial services. Bank customers stand to gain from this.”

‘Disruptive’ vs. Collaborative
According to the report, collaborative FinTech ventures – those primarily targeting financial institutions as customers – are gaining ground over so-called “disruptive” players that enter the market to compete against those institutions.

Funding for collaborative FinTech ventures, which accounted for 38 percent of all FinTech investment in 2010, grew to 44 percent of funding in 2015, with the remaining investments made in ventures that compete with financial institutions. During that six-year period, the percentage of funding for collaborative FinTech ventures in North America rose even more dramatically, from 40 percent to 60 percent. In Europe, however, the reverse was true: Funding for “disruptors” there rose from 62 percent of all FinTech investments in 2010 to 86 percent in 2015. 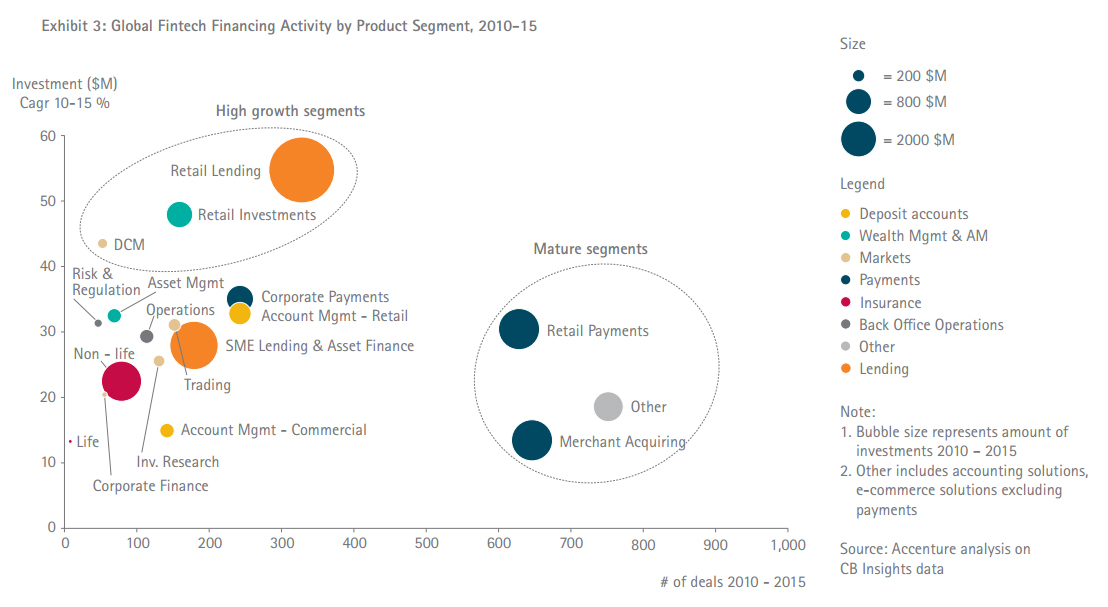 “The proportion of competitive FinTech ventures in Europe and Asia is much higher than in North America, which largely reflects the earlier stages of maturity of FinTech markets, particularly outside of London,” said Julian Skan, a managing director in Accenture’s Financial Services group who oversees the FinTech Innovation Lab London. “London’s welcoming regulatory environment has made a preferred market for competitive FinTech ventures to test their propositions. Banks too stand to benefit from this, as it drives momentum to re-imagine their own capabilities.”

According to the report, so-called “disruptors” may compete against banks at first, but often end up aligning with them through investments, acquisitions and alliances, such as BBVA’s recent stake in Atom, a mobile-only bank developed in London that launched last week.

But while a growing proportion of collaborative fintech ventures have emerged, the report cites “relatively low participation” in venture-investing by the banks themselves, which in 2015 invested $5 billion of the $22.3 billion of reported investments. That compares to an estimated $50 billion to $70 billion that banks spend on internal fintech investment each year, according to the report.

“Banks that excel in assessment and adoption of external fintech disruptions, be they collaborative or competitive, can leapfrog the competition by providing the kinds of digital innovations that consumers have grown to expect from retail and technology giants,” Skan added.

Global Fintech Investment Grew 75 percent in 2015, Exceeding $22 Billion
The report shows that global fintech investment in 2015 grew 75 percent, or $9.6 billion, to $22.3 billion in 2015. This was driven by relatively moderate growth in the US fintech sector – the world’s largest – which received $4.5 billion in new funding (a 44 percent increase); rapid growth in China’s fintech sector which increased 445 percent to nearly $2 billion, as well as in India ($1.65 billion), Germany ($770 million) and Ireland ($631 million).

The post Fintech and the evolving landscape appeared first on Payments Cards & Mobile.