Around two billion people worldwide do not use formal financial services and around half the adults in the poorest households are unbanked, according to the World Bank. When financial inclusion is a key enabler to reducing poverty and boosting prosperity, we investigate what the payments industry is doing around financial inclusion.

At its most basic, financial inclusion starts with having a bank account that is used regularly. Although the number of unbanked people is falling, nearly 40 percent of the world’s adult population still do not have an account with a bank or authorised non-bank service provider, writes Joyrene Thomas, Payments Cards & Mobile.

Participation in the financial system makes people more personally and financially resilient. They are better able to invest in education and the future, manage risk and absorb financial shocks.

Improving financial inclusion could increase the GDP of all developing economies by six percent, or $3.7 trillion by 2025, according to a recent McKinsey report. Financial inclusion is recognised as important. 67 percent of bank regulators in 143 jurisdictions surveyed by the World Bank have a mandate to promote financial inclusion. More than 50 countries have set formal financial inclusion targets. We examine the founding or design principles of an inclusive financial system in the developing world. We assess the barriers and challenges and the extent to which technology can facilitate inclusion and innovation.

Digitising finance and payments in the developing world can have a great impact on both inclusion and economic growth. In Digital finance for all: Powering inclusive growth in emerging economies, McKinsey proposes three building blocks for the widespread adoption and use of digital finance. They are mobile and digital infrastructure, a dynamic business environment for financial services, and products that meet the needs of customers in ways that are superior to what they currently use.

Mobile phones are a catalyst for financial inclusion. Across developing countries, mobile network coverage, subscriptions and now smartphone ownership are high or growing fast. People must have access to a mobile phone and an affordable data plan. A national payments infrastructure is another must-have. It enables safe, low-cost transactions between parties.

While not necessarily a pre-requisite, interoperability with the payment or banking infrastructure can help build a network effect. This can increase the benefits to everyone involved and help to build critical mass. One of the many contributing factors to M-Pesa’s success in Kenya was that it built critical mass quickly. Within three years of launching in 2007, the share of adults using the mobile money service grew from zero to 40 percent. By the end of 2015, nearly 70 percent of adults were using M-Pesa.

Achieving interoperability with existing payment or banking system is perhaps one of the most difficult infrastructure challenges. This is especially when entities target a specific segment or develop something proprietary with a view to controlling the environment. Other infrastructure must-haves include a network of cash-in/cash-out points for the conversion of cash into electronic money and vice versa, and a form of identification that financial service providers can verify. This is aside from logistical issues, such as electricity supply, internet coverage, the availability of a bank branch or agent network, especially in rural areas.

Financial inclusion is akin to a jigsaw puzzle. The various pieces have to be present to complete the jigsaw. However, there is no one set way to approach the challenges or assemble the pieces.

“You need to be realistic about the scale and what can be achieved within certain timelines. You cannot transform a society or economic environment that is fully reliant on paper to digital overnight. There will always be a transition period with financial inclusion where payment methods co-exist and have to be interoperable.” Francesco Burelli, managing director, Accenture Payment Services. 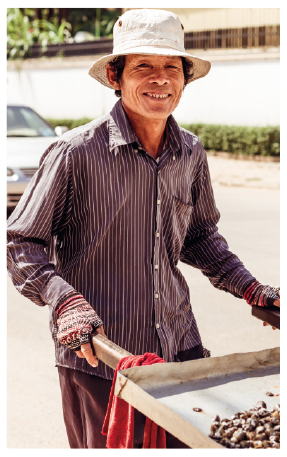 Raivis Joksts, lead offering manager at software and services company Tieto, believes that addressing the unbanked in developing countries starts with first principles: the proposition and business case. “It’s important to really understand the needs on the ground. It’s not just a matter of wanting to get more people into the system — that’s an overarching goal — you need understand what would motivate people to get on board with your initiative.” There should be some particular aspect where providers can add value, whether this is transacting or delivering access or a service.

“The more use cases you have on a device, the more effective it will be in driving financial inclusion.” Francesco Burelli, managing director, Accenture Payment Services

Providers should be looking to add value over the informal savings clubs and Hawala systems already used by the unbanked. “The more use cases you have on a device, the more effective it will be in driving financial inclusion,” says Burelli. “This could be capturing transactions or driving different habits around saving and payment.” Use cases include bill payments, merchant payments, P2P, international remittances and bulk disbursements.

Meeting the needs of the target audience is critical. “The payment method has to be safe, robust, intuitive and easy to use for everyone, whether they are computer literate, feature phone or smartphone owners or cardholders,” says Burelli. A provider will also need to build trust with customers, who may be unfamiliar with their brand and products, so education is absolutely key.

“If you work with central banks, associations of commercial banks and government-mandated institutions, the agenda there is different. They act more like financial enablers — guardians of the financial infrastructure. They have a more altruistic, non-profit motivation. Their interest is to invest to create the financial services infrastructure, which in turn could be used by new businesses, banks and start-ups to create products and services for all these market segments, including the previously unbanked.”

However, financial inclusion projects typically operate on low margins and are dependent on volume. They are investment sensitive, so they have to be as efficient as possible to deliver the services as cost-effectively as possible. “You have to be careful about your costs and how you attract sufficient market penetration to be self-sustainable, and even profitable,” advises Joksts.

He also cautions against making the one-size-fits-all mistake as the culture of payments, expectations and historical background is different country to country. A successful project in one particular country or region does not guarantee that you will be able to replicate this model elsewhere. “Each business case is different and has to be specifically defined according to the need on the ground from the end-user perspective,” says Joksts.

TECHNOLOGY AS AN ENABLER

The payments industry is often guilty of technology for technology’s sake. Or FinTech where the technology comes first. For Joksts, technology is a tool used to achieve a result. It can be leveraged to build infrastructure and innovation. “If the financial rails are made open and accessible, they can be used by players on the ground: banks, start-ups and other financial institutions, who know the local market needs best. That is where innovation would happen,” he believes.

“Technology is a tool used to achieve a result. It can be leveraged to build infrastructure and innovation.” Raivis Joksts, lead offering manager, Tieto

Various entities are driving financial inclusion either as an aim or as an outcome of other objectives. NGOs and particular payment schemes have made financial inclusion part of their mission. Governments are looking at the financially excluded for socio-political or economic reasons. They are undertaking initiatives to include the under-served or optimise their flows, or both. Profit-making organisations are also attracted by the commercial opportunities of extending the reach of financial services to fill a gap in the market.

The challenges cannot be underestimated, yet the opportunity in monetary terms alone is huge: $3.7 trillion. McKinsey puts this as equivalent to an economy the size of Germany, or larger than all the economies in Africa combined. 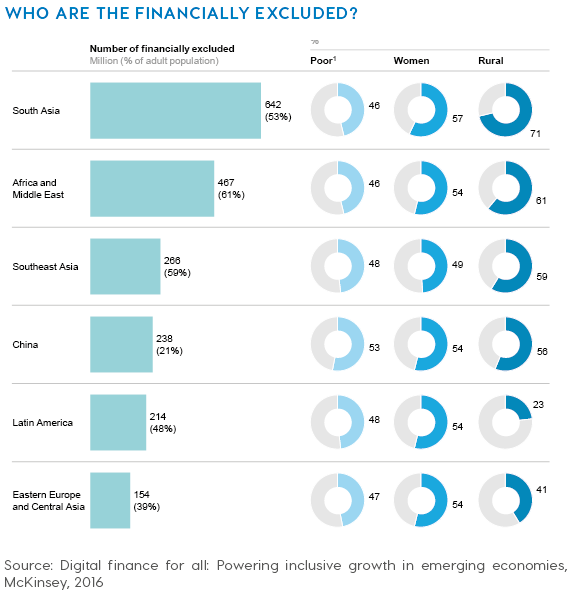 “Mobile money is driving social and economic impact for millions in emerging markets,” says John Giusti, chief regulatory officer, GSMA. “Over the last decade, mobile money has done more to extend the reach of financial services than traditional bricks and mortar banking were able to do over the last century.” As a trade body, the GSMA is likely to present the achievements of its members positively, nonetheless the statistics are impressive.

Mobile money is now available in 85 percent of markets where less than 20 percent of the population has an account at a formal financial institution. The number of registered mobile money users grew by 31 percent in 2015 to reach a total of 411 million globally, a third of which
are active.

Africa accounts for more than half of the 271 live mobile money services worldwide, and nearly two-thirds of all active mobile money accounts. Six new services were launched in Africa in 2015, with another four services in the first half of 2016.

Using mobile money as both a sending and receiving channel for international money transfers can significantly bring down the cost of remittances for users. Cross-border mobile money remittance initiatives expanded to 29 corridors in 2015, connecting 19 countries by the end of the year. 17 of these corridors are in Africa and accounted for 83 percent of all international remittances.