Financial inclusion measures and the ongoing need for cash has led to a rise in ATM numbers in almost half of countries surveyed, but overall, the global ATM installed base fell slightly in 2020

According to an upcoming report, the number of ATMs worldwide fell slightly in 2020. Asia-Pacific saw the sharpest fall, largely owing to the ongoing shift in China towards cashless payment methods and the subsequent reduced demand for cash. 50,000 ATMs were removed in China, accounting for over half of the total global decline.

Despite the overall drop, almost half of all markets saw an increase in ATM numbers in 2020. Cash is still the most widely used method of payment in many places, driving demand for withdrawal services.

Financial inclusion continues to be an important driver as many countries also remain underbanked and ATMs represent a cost-effective tool for widening access to banking services.

COVID-19 has led to slower growth and temporary ATM closures

The COVID-19 pandemic triggered national lockdowns in many countries which reduced footfall and lowered the demand for cash.

Governments also promoted cashless payments as a hygienic alternative. Because of this, many banks focused on maintaining and replenishing their existing ATM networks rather than increasing new installations. 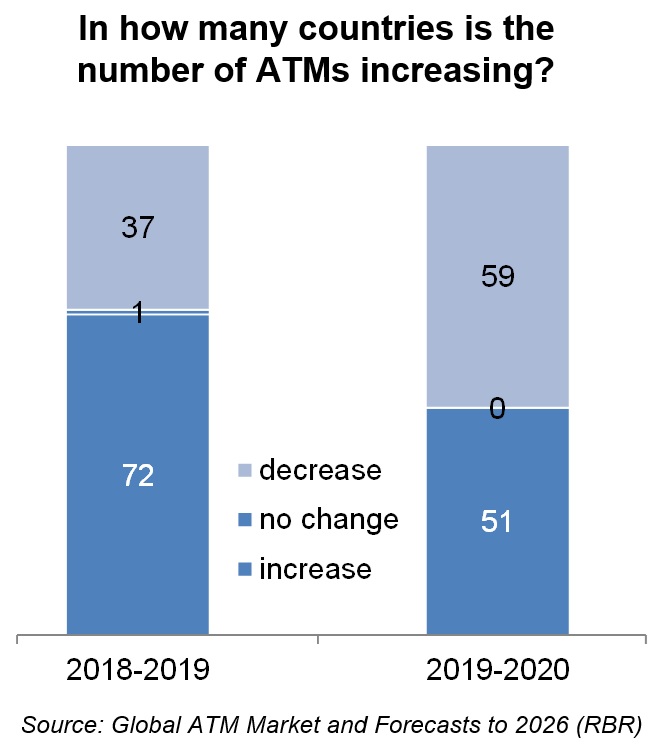 In India, for instance, there were 700 new ATM installations in 2020, compared to 7,500 in 2019. Here the disruption of the pandemic led several major banks and IADs to slow or end their rollouts. Some even chose to remove less profitable machines.

As well as seeing many ATMs permanently removed, the pandemic also led to temporary ATM closures. In the USA, such closures accounted for a significant proportion of the small decrease in independent ATM deployer (IAD) terminal numbers.

In hard-hit regions, the decline in footfall in malls and retail outlets saw some US IADs temporarily close up to one in six of their ATMs. As lockdowns ease, these ATMs are expected to reopen.

On the other hand, 51 of the 110 markets covered in detail grew, down from 72 in 2019. While COVID-19 negatively impacted ATMs in many markets, it actually contributed to growth in a few.

Egypt saw one of the steepest increases in 2020, with ATM numbers rising by 12%. Here, the Central Bank of Egypt promoted ATM deployment as a means of maintaining banking services and extending these services to unbanked people to deal with the effects of the pandemic.

Between now and 2026, the number of ATMs worldwide is expected to fall further as cashless payments continue to displace cash in many mature markets such as China, reducing the demand for ATMs.

The decreasing use of cash in regions such as western Europe has also seen some banks pool their ATMs and this is expected to further drive down ATM numbers.

As the effects of the COVID-19 pandemic begin to ease, growth will return to several markets which saw declines in 2020. The demand for cash and drive for financial inclusion continues to encourage ATM deployment in the Middle East and Africa, Latin America, Central and Eastern Europe and Asia-Pacific, and two-thirds of all markets are set to grow.

“While the total number of ATMs worldwide has fallen slightly, the sophistication of the ATMs that are being installed continues to increase as banks look to ATMs to fulfil transactions previously conducted at the teller,” says Rowan Berridge, who led RBR’s research.

With reference to the countries whose ATM markets continue to expand, he noted: “Despite the growth of cashless payments, cash remains a necessity for many. ATMs serve as a cost-effective method of increasing customers’ access to cash compared to opening bank branches, encouraging ATM deployment in underbanked areas.”