Shopping activity among Asia-Pacific (APAC) visitors to Europe weakened in Q3 2018 as currency pressures across the region diminished the spending power of APAC tourists – usually some of the highest international spenders.

Ten out of the 13 APAC countries measured by the Planet Shopper Index experienced a quarter-on-quarter decrease in their index score, resulting in the region as a whole registering a 5% fall in average score. Currency was a key driver of this fall, with many of the region’s major economies, including China, experiencing a weakening of international purchasing power as a result. 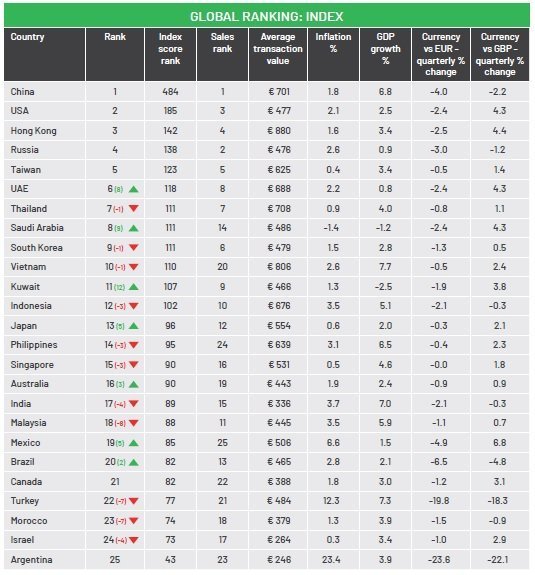 The Index combines international payments provider Planet’s data on Tax Free purchases across Europe for each source market with key economic measures including inflation, GDP growth and currency movement, to produce a robust score for each country, illustrating its position in the global league of shopping nations.

Top of the table was China, with an index score that was nearly three times the score of second-placed United States. Despite only having the fourth-highest average transaction value (ATV), ninth-lowest inflation rate and suffering a significant weakening of its currency, the sheer volume of Chinese shoppers’ spending placed it comfortably at the top of the table.

Chinese tourists spend more abroad than any other nation, parting with over $260 billion worldwide in 2016 – more than double the expenditure of second-placed United States. China’s annual Golden Week holiday proved to be a case in point of this, as Tax Free sales to Chinese shoppers during the holiday were up by 5.8% compared with last year.

Hong Kong’s score of 142 marked a 21-point decline on the previous quarter – the biggest fall of any market’s index score this quarter – while Malaysia’s 88-point score marked a 17-point fall. Hong Kong’s economic growth slowed from an unexpectedly high 4.6% year-on-year expansion in Q1 to a slower 3.5% in Q2. Many analysts and commentators expect ongoing trade disputes between China and the United States to have a negative impact on the heavily trade-reliant financial hub of Hong Kong.

Q3 saw a sizeable decrease in sales to Malaysian shoppers, with an 18.9% quarter-on-quarter decrease recorded. Similarly, ATV among Malaysian shoppers fell from €560 in Q2 to €445 in Q3 – a 20% decrease. Combined, this resulted in Malaysia falling from 10th place in Q2 to 18th in the latest index – the biggest fall in ranking of all markets in Q3.

Growth slowed in the Malaysian economy in the second quarter of the year, from 5.4% annual growth down to 4.5%, which will have impacted not only its index score, but also the level of expendable income its citizens have to spend abroad. More than this, the Malaysian ringgit fell by 0.8% in value against the euro and pound, diminishing the purchasing power of Malaysian travellers when abroad.

Unlike the EM markets of the APAC region, the developed market countries of Australia and Japan each experienced quarter-on-quarter growth in their scores, of 13 and 14 points, respectively.