Independent research conducted for the Digital and Card Payments Yearbooks suggests that account-to-account digital payments may be starting to replace card payments in some of the world’s most advanced payments markets such as Sweden, Norway and Iceland.

Data from the yearbooks supporting this strategic move include a near 300% rise in the number of UK banks offering digital wallet services such as Apple Pay and Google Pay in the last year; a rise in transaction volumes on Sweden’s SWISH service by more than 30%, with transaction values hitting a record 200 billion SEK in the last year, and the flatlining of card numbers and POS infrastructure in the Nordic markets.

Bank branch numbers have fallen by around 5.6%, or around 10,000 branches, across Europe in the past year. At the same time, the number of ATMs fell by 1.15% to 453,892. Both of these data points are clear indications of a long-term move away from cash-based services. However, the growth in overall card numbers across Europe is also slowing: overall card numbers grew by just 2.71% per year over the last five years. Over the same period, the number of card payments grew by 10.98% each year on average, and the value of card expenditure rose by 5.93% each year over the period.

“Cards are now well established as the norm in payments”, said James Wood, Managing Editor of the Digital and Card Payments Yearbooks. “However, their dominance appears to be peaking – and the rapid growth in digital wallet and instant P2P systems, especially in the Nordics, is beginning to make its presence felt.”

Across Europe’s more developed markets, such as the UK, France, the Netherlands and especially the Nordic countries, around two-thirds of banking customers are now engaged in online banking either via the internet or mobile apps. In countries like Iceland and Sweden, this number can rise as high as 85% of banking customers at certain banks being engaged digitally. 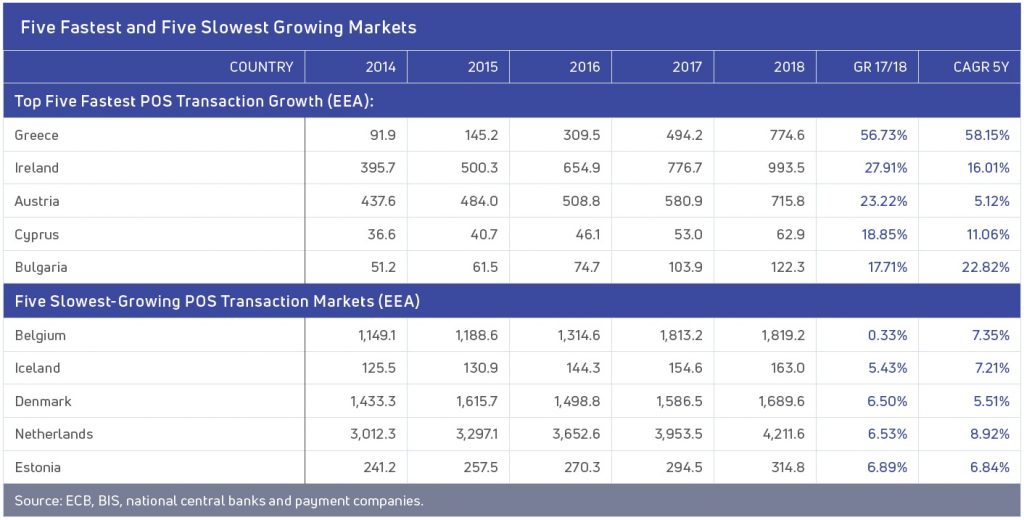 “The first phase of the digital revolution was establishing online services”, adds Alex Rolfe, Managing Director and Publisher of the Yearbooks. “We expect the next stage of digital transformation to include a move to app-based payment technologies like digital wallets, and instant P2P payments services like Sweden’s SWISH and instant payments in the Netherlands. Our yearbooks include hard evidence that these payment types are moving from the edges to the mainstream in the most sophisticated markets.”

This year, the yearbooks also demonstrate that debit cards have continued to increase their current dominance, with debit payments replacing cash at a faster rate than ever before. Across Europe, the number of credit cards declined this year by 3.5 million (-1.1%), while debit cards grew in number and usage. Across Europe, debit cards were used in 72.2 billion transactions to pay for €2,572 billion in goods and services.

“There’s no question that cards now dominate payments, and are used for more than 52% of all transactions across Europe”, Wood concluded. “However, the massive growth rates we’re seeing in instant account-to-account and mobile wallet payments lead us to believe that the next wave of development in digital finance is firmly underway, especially in the most developed markets.”