While many mature ATM markets are seeing a slowdown, developing markets are set to witness rapid expansion over the next five years, with ATMs supporting cash-reliant newly banked populations.

As previously reported, the number of ATMs globally fell for the second consecutive year in 2019. The small decline belies a more complex set of trends, however; while China is driving the fall, many markets are expanding as economies improve, salary payments are digitised and financial inclusion efforts gain traction.

Almost two thirds of the markets covered in this latest study are projected to be larger in 2025 than they are today, despite an expected fall of 1% in ATMs globally. With branch numbers under pressure, for many countries increasingly multi-functional ATMs remain a valuable tool for providing financial services, allowing banks to cost-effectively expand their presence in more remote areas. 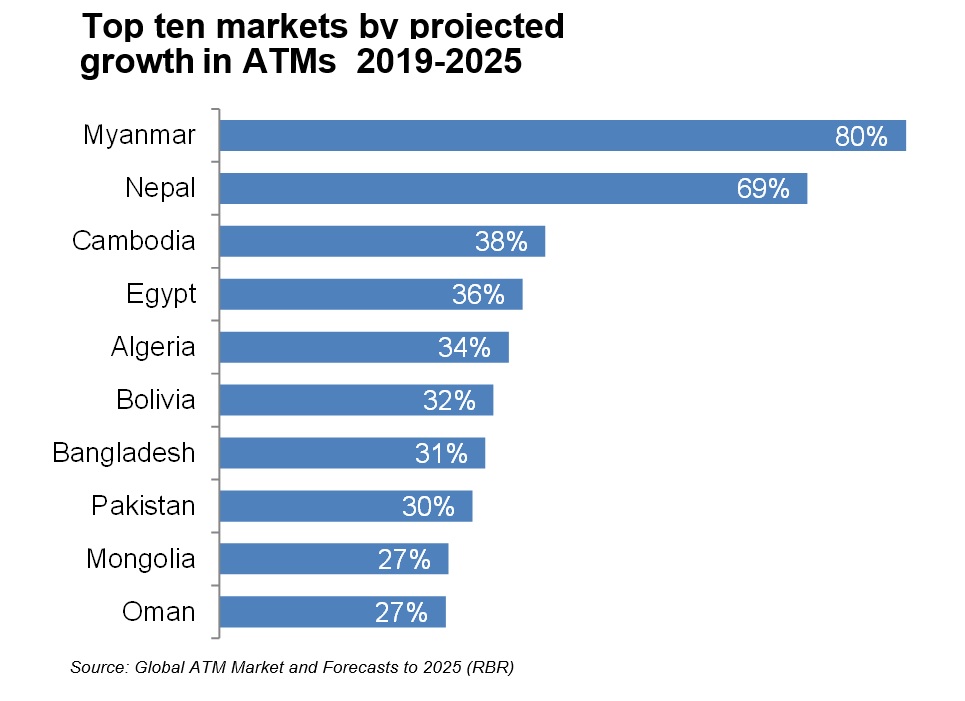 Markets with low numbers of ATMs compared to population are forecast to see high growth over the next five years. Many of these are in Asia and Africa: the fastest growth is expected in Myanmar, where the number of installations is projected to almost double by 2025. Following almost a decade of military rule, ATMs were permitted to be installed again in the country from 2011, and deployment has been strong every year since. Large swathes of the population remain unbanked, however, indicating huge potential for further growth, in a country where cash remains popular.

Financial inclusion efforts play a role in the majority of the fastest-growing markets, the Global ATM Market and Forecasts to 2025 report shows. Pakistan’s central bank mandated at least one ATM per branch by 2020, while the Bangladeshi government has been encouraging deployment in more rural, underserved areas. As with Myanmar, both markets had fewer than 100 ATMs per million people in 2019; compared to a world average of 421, there is clearly plenty of potential for expansion.

Even as banked populations grow, many societies remain cash-heavy: in Egypt, where pensions and government salaries have begun to be distributed onto payment cards, demand for ATMs remains high, with cash expected to be the main consumer payment method over the next five years. Increasing debit card issuance has been driving ATM usage in Nepal, meanwhile, where ATMs are set to see the second highest growth by 2025. Nepalese banks have been encouraging customers to take advantage of automated and digital services, shifting such requests away from the teller.

“While several major markets are causing an overall global decline in ATM installations, the reality is that potential remains in the majority of countries,” comments Rowan Berridge, who led the research for RBR. “Cash is by no means dead, and in countries seeing economic development and ever greater levels of banked population, ATMs will remain essential for the foreseeable future”.