Early Warning Services announced on October 26th that it has entered into an agreement to acquire clearXchange, which will create a bank-owned real-time payments system with unparalleled DDA connectivity.

The transaction is expected to close by the end of 2015, after which seven leading banks will own the 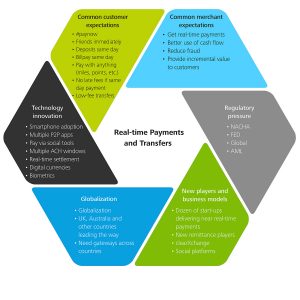 The new integrated platform is expected to be available to all US banks and credit unions in early 2016. The combined solution will deliver secure, real-time, non-card payments through a single platform that merges immediate funds availability with integrated real-time authentication and fraud management capabilities.

The combined entity will have several key assets as it seeks to establish a foothold in real-time payments:

Competing real-time payments initiatives will need to develop strategic responses to the Early Warning/clearXchange combination. The Clearing House already announced partnerships with VocaLink and FIS (see “The Clearing House Stakes its Claim in Real-Time Payments”). A “co-opetition” model may emerge as key players seek to partner with Early Warning.