Domestic Schemes matter: acquirers and merchants should not overlook them

Amidst all the hype about new payments methods and channels, it’s easy to ignore smaller, single-market players – but to do so would be a mistake. 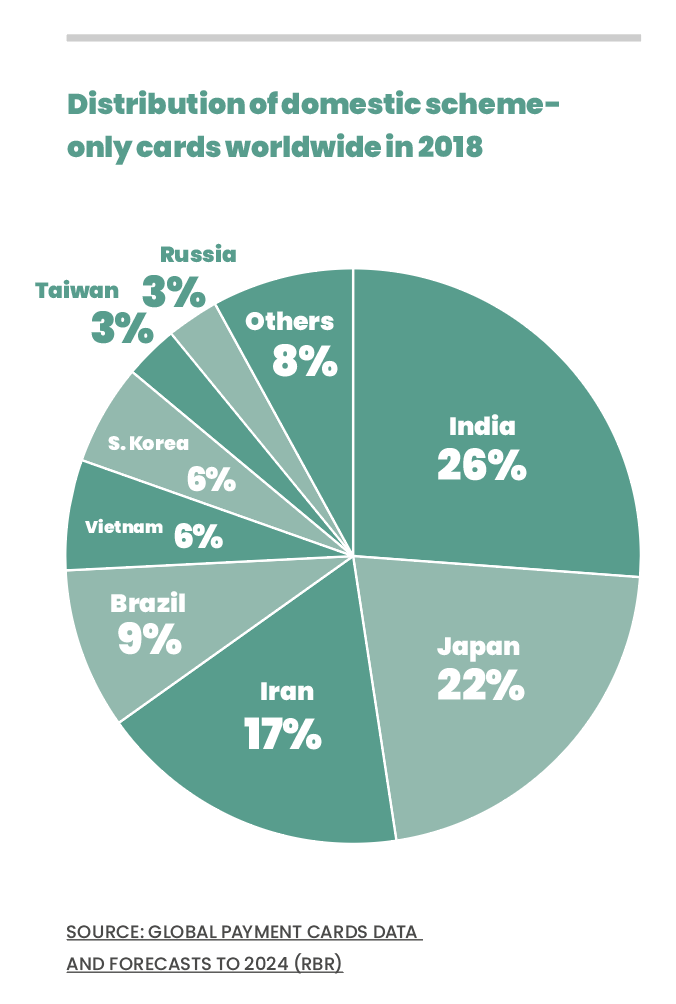 Domestic payment schemes accounted for 12% of all global payments last year – and they’re adapting strongly for the digital environment.

India, Russia and Brazil stand out in particular, with growth driven by schemes like RuPay, Mir and ELO.

In Russia, the growth of Mir is down to public sector workers receiving their salary payments through the scheme.

Lower processing costs, both for issuers and acquirers, further encourage the adoption of domestic scheme-branded cards. This is one of the reasons behind RuPay’s growth in India, which makes up a quarter of all domestic scheme cards worldwide.

In many countries, cards branded with a domestic scheme are offered as an entry product to the formerly unbanked alongside their first account.

This is the case in Chile, where BancoEstado’s CuentaRUT debit cards carry the branding of the Redcompra domestic scheme.

Typically, domestic schemes have an excellent understanding of their target customers, especially in countries with significant unbanked populations.

Overall, limited international functionality on domestic scheme-branded cards is not an issue as cardholders tend not to travel outside the country of issuance.

Domestic schemes also benefit from a wider acceptance network than for international schemes, as in Germany and Portugal. And when it comes to e-commerce, domestic schemes rule the roost.

New (September 2020) research from PPRO says domestic schemes account for 77% of e-commerce spend; by 2024, they forecast that this share will increase to 82%.

Although domestic-only cards account for a relatively small segment of the payment card sector, they possess some unique advantages that ensure their continued relevance in the future.

In particular, schemes like Belgium’s bancontact show how nimble, flexible and adaptable domestic schemes can be. Bancontact launched payconiq, a mobile payments app, in 2015, and has since expanded the scheme to Luxembourg and the Netherlands through partnerships with Digicash and other local players.

A recent study led by payments veteran John Chaplin, formerly of Visa and First Data, shows the extent to which domestic schemes are up for the fight against international players – including big tech companies.

More than half of the 38 domestic payment schemes surveyed in Choosing the Right Route: Domestic Schemes Innovation have hired an innovation department to combat the threats posed by international payment schemes and meet consumer demands for new services.

Overall, two-thirds of those surveyed are now investing in innovation either internally, or with external partners.

Almost nine in ten of the domestic schemes surveyed are currently investing in open APIs to enable connectivity to global payments, while 94% are planning to expand beyond their card products to create Real-Time Payments schemes (like Sweden’s SWISH) and, unsurprisingly, mobile apps – such as that created by Brazil’s ELO in 2018 in partnership with iPass.

With six in ten domestic schemes now either offering a mobile app or well advanced in their move towards mobile, domestic players are demonstrating how agile and flexible they can be.

What’s more, their move towards open APIs shows they are ready for partnership – and with twelve percent market share in a trillion-dollar global payments market that’s expanding at more than 20% each year, acquirers and merchants would do well to integrate these schemes into their payment offerings – especially since they are also often cheaper to work with than the major tech players.

The post Domestic Schemes matter: acquirers and merchants should not overlook them appeared first on Payments Cards & Mobile.