MEA is the fastest growing payment cards region worldwide, with the number of cards increasing by 18% to 540 million in 2014.

The region also has the world’s lowest level of cardholding relative to adult population, underlining the potential for further growth, which RBR forecasts will continue to outstrip that of other regions over the next five years.

Domestic schemes are concentrated in a few countries

Domestic scheme cards make up two thirds of the rapidly growing MEA card base, however they are 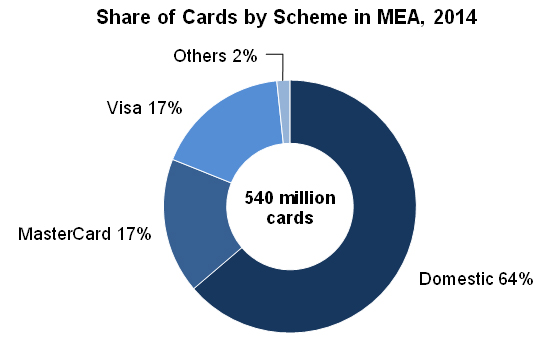 concentrated in certain markets. The remaining cards are evenly split between MasterCard and Visa.

Domestic scheme cards have also enjoyed success in the third largest MEA market: Nigeria. Historically, international card schemes steered clear of Nigeria, which allowed the domestic scheme Verve, operated by Interswitch, to build up a sizeable presence. Even though internationally-branded cards have seen strong growth in recent years and dual-badged Verve MasterCard cards have been issued since 2011, Verve-only cards still account for 44% of the Nigerian card base.

Domestic scheme cards also have a significant share in the smaller Moroccan market, where the lower issuance costs for domestic Centre Monétique Interbancaire (CMI) cards are attractive in a country where many cardholders do not require a card for usage abroad.

Strong performance by MasterCard, in neck and neck battle with Visa

MasterCard and Visa have almost equal numbers of cards in circulation in the region, but the former has seen the stronger recent growth. MasterCard has used various tactics to increase its share, including partnerships; for example in Kenya, two banks – Kenya Commercial Bank and Diamond Trust Bank – have begun to issue prepaid contactless MasterCard cards in partnership with the Nakumatt supermarket chain. These cards allow cardholders to accumulate loyalty points for purchases at Nakumatt outlets.

Meanwhile, in South Africa MasterCard’s gain in share has come about through the launch of the South Africa Social Security Agency (SASSA) MasterCard debit card, with biometric functionality issued to social grant recipients by Grindrod Bank. This is part of a new system aimed at reducing benefit fraud and administrative costs.

Despite vast potential, MEA cards market will be tough nut to crack

Commenting on the potential for international card schemes in MEA, RBR’s Chris Herbert says: “The progressive lifting of sanctions in Iran should pave the way for the appearance of MasterCard and Visa cards in the country over the next few years, although it will take a long time for them to be issued on a large scale there”.

The rapid growth and low penetration of internationally-branded cards more generally, demonstrate MEA’s high potential for international schemes. Nevertheless, the established presence and strong brand awareness of many of the incumbent domestic schemes also make the region challenging for other players.