Cards only carrying domestic payment card schemes branding accounted for 12% of all payment cards worldwide in 2018. This sector has strong growth potential, with products tailored to local market requirements. 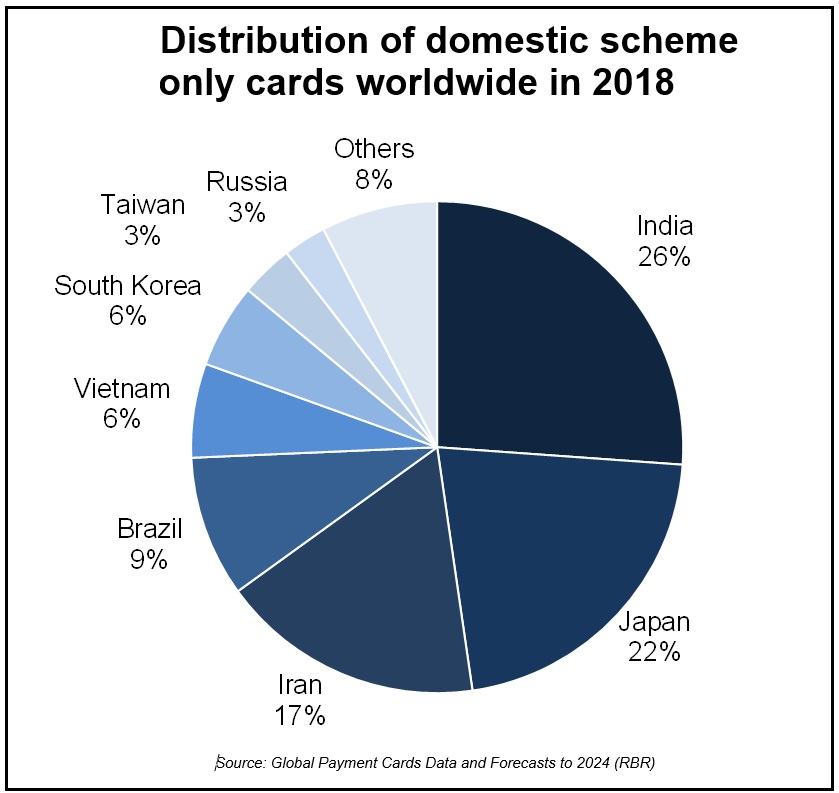 Several of the world’s largest payment cards markets are seeing a rapid increase in the numbers of domestic scheme‑branded cards, according to Global Payment Cards Data and Forecasts to 2024.

India, Russia and Brazil stand out in particular, with significant growth, driven by their respective schemes RuPay, Mir and Elo. In Russia, domestic payment card scheme growth is largely attributable to public sector workers receiving their salary payments through the scheme.

Lower processing costs, both for issuers and acquirers, further encourage the adoption of domestic scheme-branded cards. This is one of the reasons behind RuPay’s growth in India, which makes up a quarter of all domestic scheme cards worldwide.

In many countries, cards branded with a domestic scheme are offered as an entry product to those joining the formal banking system for the first time. This is the case in Chile, where BancoEstado’s CuentaRUT debit cards traditionally only carry the branding of the Redcompra domestic scheme.

Domestic schemes have a competitive edge

One factor behind the success of domestic payment card schemes is that they have an excellent understanding of their target group of customers and financial difficulties they might face, particularly in countries with significant unbanked populations. Overall, limited international functionality on domestic scheme-branded cards is not considered a significant issue, as their cardholders do not tend to travel outside the country of issuance.

Domestic schemes also benefit from the fact that in some countries there already exists a wider acceptance network for domestic than for international schemes; Germany and Portugal are examples of where this is the case.

According to RBR, there is strong potential for growth of domestic schemes, especially in countries where a significant proportion of the population remains unbanked. Daniel Dawson, who led Global Payment Cards Data and Forecasts to 2024, noted: “Although domestic‑only cards account for a relatively small segment of the payment card sector, they possess some unique advantages that will allow them to remain relevant in the coming years”.