New research shows that Discover remained the most widely accepted card scheme worldwide at the end of 2018. Global Payment Cards Data and Forecasts to 2024 shows that Discover cards can be used at 55.9 million merchant outlets, 79% of the global total. 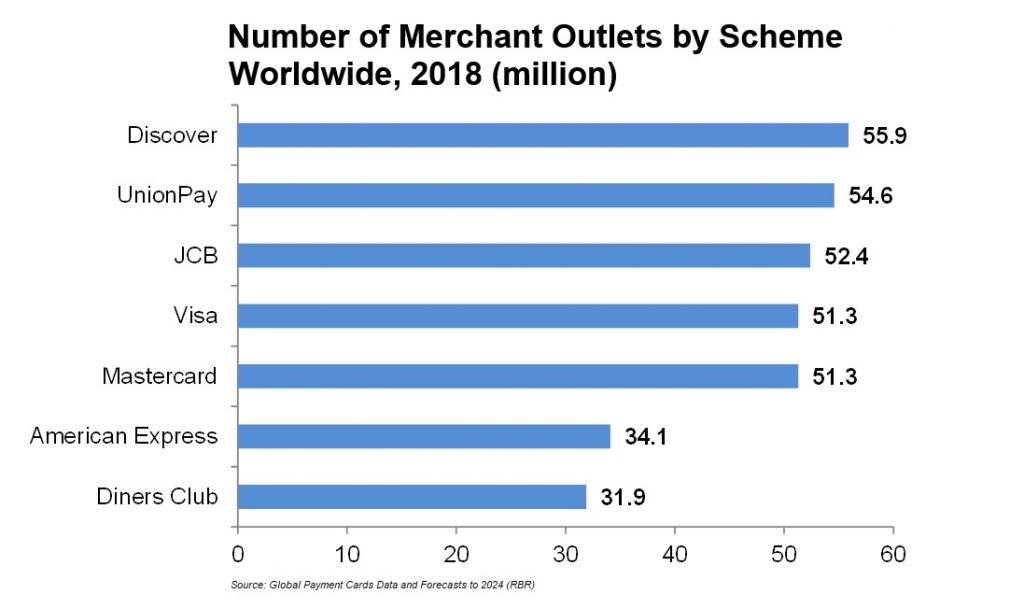 Discover benefits from reciprocal network-to-network agreements with UnionPay, JCB and BC Card, providing acceptance for Discover at all outlets in China, Japan and South Korea – it is worth noting that if China is excluded, Discover is accepted at only 68% of the world’s outlets. These agreements also mean that UnionPay and JCB are second and third respectively in terms of acceptance, as they can be used at a large number of US outlets in addition to their home markets.

The influence of China and Japan may mean that Discover, UnionPay and JCB have the most outlets worldwide, but in the majority of markets, Visa and Mastercard are the most widely accepted schemes – they both have 51.3 million outlets, 73% of the total. RBR’s report also shows that the proportion of outlets accepting Visa Electron and Maestro is much lower, especially because of little or no acceptance of these sub-brands in China and the USA.

American Express and Diners Club are accepted at 34.1 million and 31.9 million outlets respectively. Their acceptance is largely limited to traditional travel and entertainment outlets such as hotels, restaurants and airlines, but this is changing as they expand into more everyday locations. Diners Club can be used at all outlets which accept Discover in most countries, with the important exception of China, where the agreement with UnionPay does not cover Diners Club. Although JCB is considered a T&E scheme globally, this is not the case in Japan, where it is accepted more widely.

RBR forecasts that the number of merchant outlets accepting cards worldwide will grow by 51% between end-2018 and end-2024, from 70.8 million to 107.1 million, largely driven by initiatives from governments to encourage cashless payments. Moreover, downward pressure on interchange fees is leading to reduced merchant service charges and improving the business case for merchants to accept cards.

“Advances in technology, such as contactless enabling shorter queues through quicker processing of payments, will make it more appealing for some merchants to accept cards when they may have been reluctant to do so in the past,” comments Daniel Dawson, RBR.