A clear majority of banks believe that they will have to overhaul their core banking infrastructure over the next three to five years if they are to face off the threat from more agile competitors, according to research conducted by Finextra.

The study, ‘Invigorating Banking’, conducted on behalf of next-gen banking vendor Five Degrees, calibrated responses from 126 participants at 96 different financial organisations in 38 countries. It finds that banks are losing faith in the ability of their legacy systems to withstand the strain of customer requirements for a digitally-led banking service. 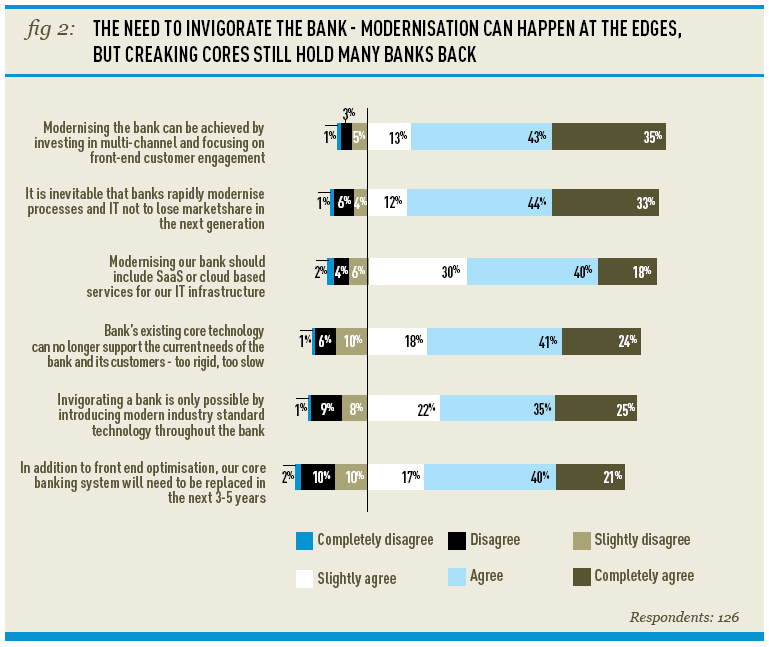 While 78% of respondents agreed or completely agreed that modernising the bank can be achieved by investing in multi-channel and front-end engagement, fully 65% felt that their existing core system could no longer support its needs.

When looking at plans for core banking system replacement, 61% of respondents agree or completely agree that this will need to take place in the next three to five years. This rate was even higher when the respondents only from South America, Middle East, Africa and Central and Eastern Europe are considered together. Among banks from these regions, which contain mostly developing economies, 89% agreed that they would need to undertake major surgery in this timeframe.

Despite the reservations, not many of those surveyed demonstrate a clear appetite for a rip and replacement strategy. Indeed as many as half of those who responded positively to the question felt they would be unable to get boardroom approval due to the risks, costs and failure rate associated with such a massive IT overhaul.

The dominant drivers for seeking modernisation are familiar, and it is not surprising to see the majority of financial institutions embrace them. But what is more unusual is to see the high number of respondents who agreed or completely agreed that opening their systems to third parties is part of their modernisation agenda, in order to leapfrog new market entrants and act as a wholesale distributor of financial services via a network, market or API approach. 63% of respondents agreed or completely agreed that this is something that they want to do.